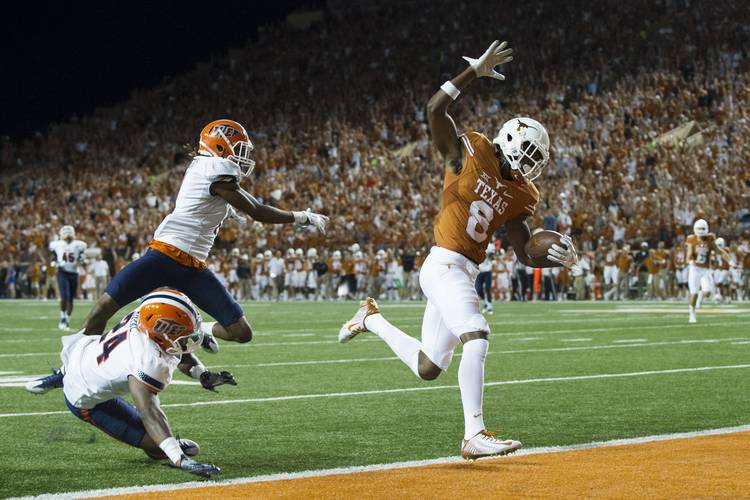 Dorian Leonard (8) of the Texas Longhorns catches a 46-yard touchdown pass against the UTEP Miners during the second half on September 10, 2016 at Royal-Memorial Stadium in Austin, Texas. (Photo by Cooper Neill/Getty Images)

The NFL’s long been labeled the No Fun League. Well, the same theories apply in college football, unfortunately.

Texas defensive tackle Poona Ford got flagged 15 yards for bowing to the crowd after a big play Saturday night against UTEP. This was one instance where coach Charlie Strong had no issues whatsoever.

“Like coach Strong told me on the sideline, ‘It’s fine. Y’all just go out there and keep having fun,’” senior leader Paul Boyette Jr. said. “So that’s what we’re gonna do.”

The Longhorns sure had a blast these last two weeks, rolling up a 2-0 record. Now, the circus leaves town. Thirty-six days will pass before Texas returns to Royal-Memorial Stadium. If this bunch can play with any level of consistency, they could return home looking like Big 12 title contenders.

That’s not conjecture. Currently ranked 11th, Texas is the highest-ranking Big 12 team in the Associated Press’ Top 25 poll. Other conference heavyweights look shaky. The only hangup has been Texas’ inability to show consistency on the road the last two years.

If Strong said it once last season, he said it a dozen times. “I just want to see the same team I saw in Dallas,” he lamented as Texas beat No. 10 Oklahoma and then lost at Iowa State and West Virginia.

First comes a long flight to California, giving all those UT fans itching to join the Pac-12 a true West Coast road trip. Kickoff is at 9:30 p.m. Central time. Coach Sonny Dykes’ squad is 1-1 after losing a 45-40 shootout to San Diego State on Saturday.

“That first day, I’m gonna do a little sight-seeing,” receiver Jerrod Heard said with a huge laugh. “Pretty much, we’ll be in the hotel just preparing ourselves and getting right for a good team that we’re about to face.”

Several players said this team is more mentally mature than last year’s unit. And it cannot be overstated how confident the Longhorns are with new offensive coordinator Sterlin Gilbert and freshman quarterback Shane Buechele.

And Texas’ psyche will get boosted by the return of multiple starters who sat against UTEP as a precaution. That includes running back D’Onta Foreman, left tackle Connor Williams and tight end Caleb Bluiett.

“It’s nothing new to us whenever we play Cal, but it is something new when we have a different type of offense,” left guard Patrick Vahe said. “We’ve just got to stay consistent by working together, having the same mindset and executing the play that’s called. We’ll see how it goes.”

After an off week, conference play begins with a road trip to Oklahoma State followed by the annual game in Dallas against rival Oklahoma. Texas won’t be home again until Oct. 15 against Iowa State.

“We’ll be ready,” linebacker Malik Jefferson said. “It just takes preparation, like we do every week. We all have to be in our playbooks and we all have to be ready. We’re going in as big dogs, actually.”

This 36-day road trip isn’t unprecedented. The Longhorns went 43 days between home games in 2013, spending the entire balance of October on the road. Texas returned home to face Kansas on Nov. 2, 2013, in the midst of a six-game winning streak. That pushed the Horns to the brink of a Big 12 title.

One step at a time, though.

“This win (over UTEP) is over with,” Buechele said. “We have to go in next week and be excited to go play Cal.”