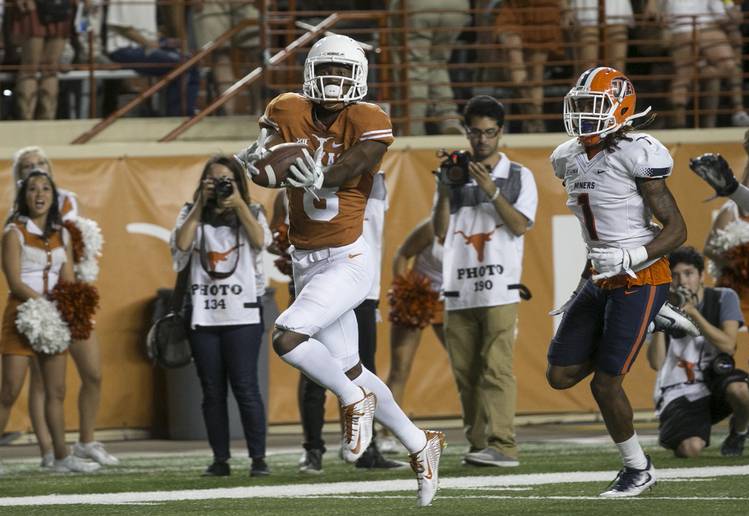 There were 136 snaps taken in Texas’ 41-7 win over UTEP on Saturday. Here are five that ended up making a big difference.

Senior Jacorey Warrick lost a fumble out of the UTEP end zone on Texas’ seventh snap, but the Longhorns still set the foundation for an effective evening on offense. Texas covered 48 yards on its first drive, and the Longhorns averaged 5.8 yards per rush while freshman quarterback Shane Buechele completed both of his passes. Warrick later atoned for his mistake with an eight-yard touchdown catch.

“Everybody keeps their spirit high and is upbeat about the offense,” Warrick said. “In the past, it would be if you get one pass thrown to you, you don’t know if the next one was coming to you. Now, we don’t worry about it. We’re just so much locked into the tempo. I think that’s just kind of on the backburner of your mind. You’re going to get multiple opportunities to make plays in this offense.”

Less than two minutes after Warrick’s fumble, Jerrod Heard got the Longhorns onto the scoreboard when he out-leaped UTEP’s Devin Cockrell for a 29-yard pass from Buechele. One week after he fell a yard short of a 69-yard touchdown catch, Heard celebrated his 21st birthday Saturday with six catches, 46 yards and two touchdowns. Looks like the ex-quarterback is fitting in well with the wide receivers.

UTEP junior Aaron Jones entered the week as the nation’s leading rusher, and his 51-yard touchdown run pulled the Miners within 10-7 with 8:28 to go in the second quarter. The Texas defense, though, won its duel with Jones, who finished with 123 rushing yards on 18 carries. Jones recorded eight rushes after his touchdown run, and only one of those attempts resulted in a gain of more than nine yards.

One week after he broke up a pass in the end zone at a key moment in the Notre Dame game, Texas safety DeShon Elliot came up with a second-down sack of UTEP quarterback Kavika Johnson. An official review had to determine the play wasn’t an intentional grounding or a lost fumble, but the loss of 17 yards eventually led to a punt from the UTEP 28 with 3:41 to go before halftime. Nine plays later, Texas took a 20-7 lead on Warrick’s pre-halftime touchdown.

5. First time for everything

Saturday’s showdown was all but decided when junior Dorian Leonard hauled in a 46-yard touchdown pass to make it 34-7 with 6:07 to go in the third quarter, but the touchdown helped Leonard keep pace in his deep receiving corps. Heard, Leonard and Warrick each recorded the first touchdown catches of the collegiate careers during the 34-point win over UTEP.

“We were fortunate enough today for those guys to get playing time, so just continuing to create depth and get those guys game experience,” offensive coordinator Sterlin Gilbert said. “Game experience is invaluable, and we just want to continue to be able to be in situations and be able to put guys (in) and develop great depth in all those skilled positions.”