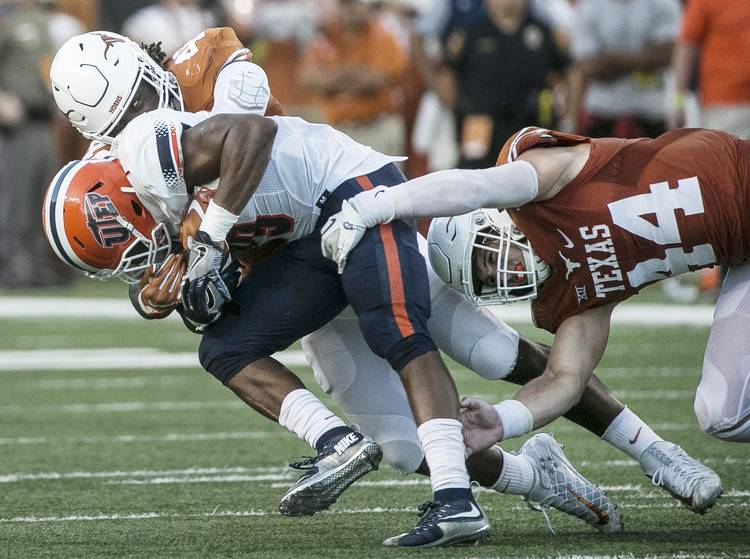 Texas sophomore linebacker Breckyn Hager earned his first-ever start on Saturday, and the Westlake product produced a team-high eight tackles and one sack.

After the game, teammates and coaches offered up a couple of Hager’s nicknames.

Texas coach Charlie Strong referred to Hager and freshman linebacker Malcolm Roach (who had four tackles and a sack) as “kamikazes.” Later, senior defensive tackle Paul Boyette Jr. referred to Hager as a “wild man” because of his hair, which he allegedly doesn’t brush.

“Wild man, he’s (grown) phenomenally,” Boyette said. “His confidence level was shot early, but he came in and worked his tail off in summer workouts, summer conditioning and fall camp, and showed he can come out and contribute at the Fox position, outside linebacker and even defensive end. I tip my hat off to him.”

Hager, the son of former Texas All-American Britt Hager, recorded 18 tackles and one interception over nine games in 2015.

No rules: Even though Kris Boyd picked up a holding penalty on a punt return, Strong described the sophomore as a player who “has no rules at all” on special teams.

Boyd was limited by cramps in last week’s opener against Notre Dame, but made his presence felt against UTEP. He downed a Michael Dickson punt at the 1-yard-line in the first quarter, and later forced a fumble on a kickoff.

Boyd also got some work as a defensive back, and he picked up two tackles in the fourth quarter.

Bragging rights: Among the high school recruits at Royal-Memorial Stadium were a pair of quarterbacks — Westlake senior Sam Ehlinger and Vandegrift senior Alex Fernandes. Ehlinger is the only quarterback committed to Texas’ 2017 recruiting class; Fernandes is a UTEP pledge.

Ehlinger and Fernandes also play in the same district, so Fernandes can look for some sort of revenge when Vandegrift hosts Westlake on Sept. 23. Ehlinger’s status for that District 25-6A showdown, though, is unclear; he’s missed the last two weeks with a knee injury.

Odds and ends: Former Texas baseball coach Augie Garrido and NBA superstar Kevin Durant were among those recognized at the game. … Texas announced a crowd of 92,863 for what will be the team’s last home game until it hosts Iowa State on Oct. 15. … UTEP defensive lineman Gene Hopkins, an Elgin native, had two solo tackles in his homecoming.

Jerrod Heard is catching on just fine at wide receiver