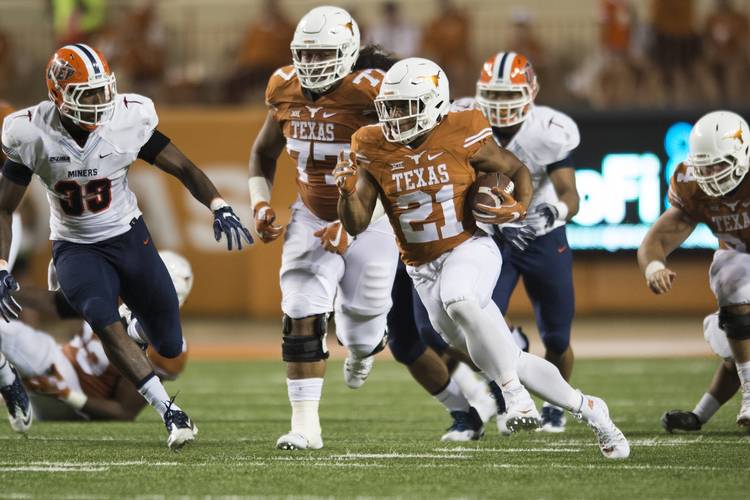 Kyle Porter #21 of the Texas Longhorns breaks free against the UTEP Miners during the second half on September 10, 2016 at Royal Memorial Stadium in Austin, Texas. (Photo by Cooper Neill/Getty Images)

Speaking at his weekly press conference on Monday, Texas head coach Charlie Strong said there should be a crowded backfield for Saturday’s road trip to Cal. Junior D’Onta Foreman was held out of Saturday’s 41-7 win over UTEP, but he is listed alongside sophomore Chris Warren III on the depth chart. Freshman Kyle Porter also is expected to play.

Foreman ran for 131 yards and a touchdown against Notre Dame, while Warren has logged a team-high 141 yards on 34 carries this season. Porter only has eight offensive touches this fall, but the Katy product is averaging 4.1 yards per carry. Freshman Tristian Houston also logged the first three carries of his career in the win over UTEP.

This summer, Warren noted that his ideal offense would split carries and have three or four running backs with around 700 rushing yards. Following the 34-point win over the Miners, Warren said it was important for the team to build depth in its backfield.

“We all bring something different to the table,” Warren said. “I feel like everybody has not completely earned the right (to play), but they have the chance to earn the right. The opportunity is there for them. Everybody can earn carries, and I think that everybody is talented enough to.”

After years of failed promises, Texas’ new offense is delivering