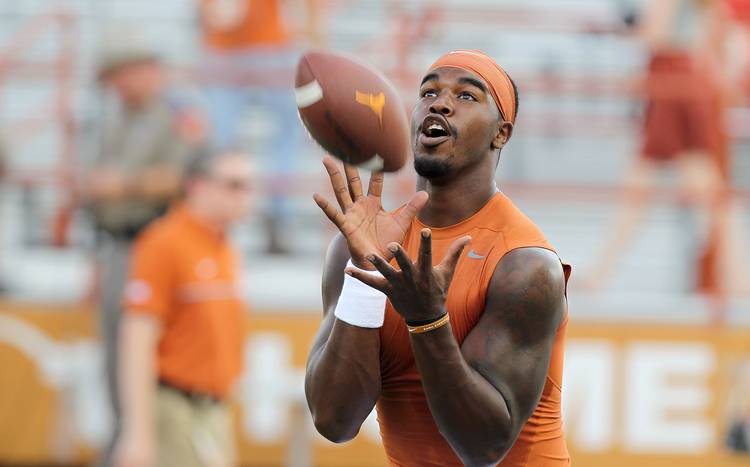 A decade ago, Texas senior quarterback Tyrone Swoopes could be found on the offensive line.

Swoopes recalled on Monday that he was first a running back when he began playing football. In the sixth grade, though, he became too big to play a ball-touching position, so he lined up as a center.

“It wasn’t fun,” Swoopes said. “You had a sticker on the back of your helmet so they knew you couldn’t carry the ball, so we always tried to do some fumble-on-purpose kind of thing. We tried to do that, but most of the time, it didn’t work out.”

Swoopes has been a quarterback since middle school, but he told reporters that he jokingly asked Charlie Strong if he could fill in for injured tight end Caleb Bluiett against UTEP on Saturday. Strong was unresponsive to the request, but the thought of Swoopes lining up as a tight end isn’t unfathomable.

Draft analyst Charlie Campbell projected last week that the six-foot-four-inch, 249-pound Swoopes could be a fourth-round pick if he switched to that position. For comparison’s sake, two tight ends were taken in the fourth round of the 2016 NFL Draft:

Swoopes downplayed the thought of becoming a tight end, and said he’d worry about considering a position change when the time came. Like quarterback-turned-receiver Jerrod Heard, though, Swoopes did say that he could catch a football.

“I feel like I have pretty good hands,” Swoopes said. “Of course, if I were to do something right now, I wouldn’t be able to do what I needed to do to be successful.”

Swoopes will once again be Shane Buechele’s back-up during Texas’ trip to Cal, but he should see playing time in Texas’ “18 Wheeler” package. Swoopes has rushed 15 times for 56 yards and three touchdowns this season. He has thrown only passes, but he had a 44-yard pass against UTEP negated by an offensive pass interference call.

Depth chart in backfield deepens ahead of Cal game