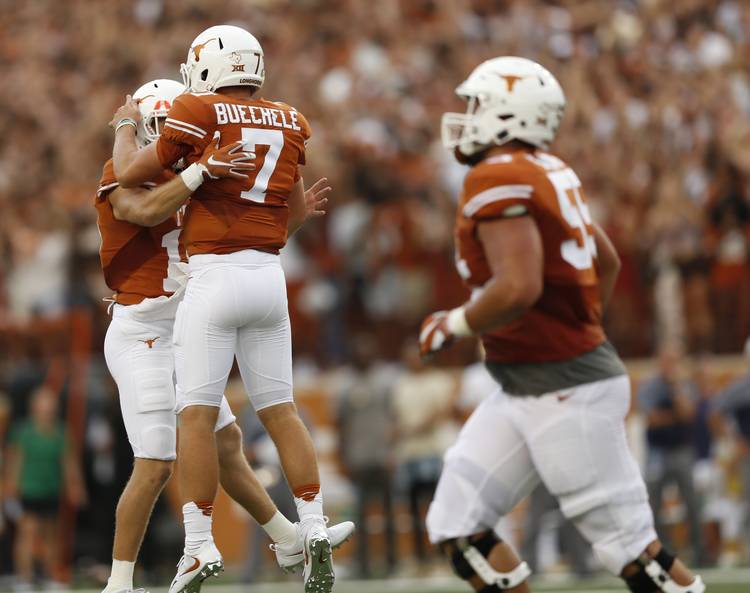 Out in the Bay Area, Sonny Dykes watched the Notre Dame-Texas game on Labor Day weekend and liked what he saw offensively. So did Longhorns fans.

“I thought they were simple, which was very smart,” the California coach said. “It allows you to execute at a high level.”

In 2014, former UT quarterbacks coach Shawn Watson tried to mold Tyrone Swoopes into a pocket passer. That didn’t work. Then the offensive coaches promised to go up-tempo last season. In reality, nothing changed, and Jerrod Heard regressed as the season wore on.

Sterlin Gilbert came in promising a spread offense that had real get-up-and-go. “Texas-fast,” he called it. Finally, something clicked. After scoring 91 points in two games, the Longhorns must be relieved this is all working as advertised.

“Very happy,” said senior receiver Jacorey Warrick, now running routes for the fourth play-caller of his UT career. “Coming from where we’ve been in the past, with the guys who have been in our past offenses, we’re all so happy for each other that we’re doing well.”

The 11th-ranked Longhorns (2-0) are anxious to see how this all works in Berkeley, Calif., against the Golden Bears (1-1). Coach Charlie Strong said all starters held out against UTEP should return this week, including running back D’Onta Foreman and offensive linemen Connor Williams and Kent Perkins.

With Gilbert directing traffic, the offensive staff has a simple premise. “What we talk about is playmakers and getting the ball into your playmakers’ hands,” Strong said.

Texas’ one-year offensive metamorphosis has been statistically staggering. The Horns scored 45 points in the first two games last season. This year, they should have 105 points by now, if we’re counting John Burt’s long drop against Notre Dame and Warrick’s fumble into the end zone against UTEP.

Asked if he was having fun again, senior Tyrone Swoopes said, “I would say so. We’re winning. It’s looking really good for us this year, not saying that in the past it looked bad. But with everything that’s happening around us, everybody on the same page, the future looks promising.”

“I wouldn’t use the word ‘relief.’ That’s not the type of feeling we have when we see the type of points put up,” left guard Patrick Vahe said. “We just feel like we can raise the bar just a little bit higher.”

On Monday, freshman quarterback Shane Buechele was named the Big 12’s newcomer of the week for the second straight week. Last season, the Horns had nine passing touchdowns in 12 games. Buechele is on pace for 36.

Buechele has done a masterful job of reading and reacting. Still, he’s not happy, even though Texas is averaging 5.8 yards per play.

“No, we need to be faster,” Buechele said of the tempo. “That’s part of our offense. When you go fast, it makes everybody around you just lock into the offense and it makes the defense do simpler things.”

Receiver Jerrod Heard had a school-record 527 total yards against Cal last season, when he was the quarterback. He praised Buechele’s poise and believes Gilbert’s simplicity is the key. “I feel like for your offense to be successful, you’ve got to keep it like that,” Heard said.

The offense is based on pre-snap reads by the quarterback. Buechele must see where the safeties line up and determine whether the run or pass options he’s given on each play would be more successful. There are few five-step drops, reading coverages and making decisions on the fly.

“If you want to load the box, then we’re gonna throw it over your head,” Strong said. “If you’re gonna back off us, we’re going to turn around, hand off and run it because our offensive line is doing a great job protecting.”

This isn’t rocket science. “You just push the tempo,” Buechele said. “It’s about guys getting lined up and seeing the formation. Once everybody’s lined up, you snap it.”

Depth chart in backfield deepens ahead of Cal game