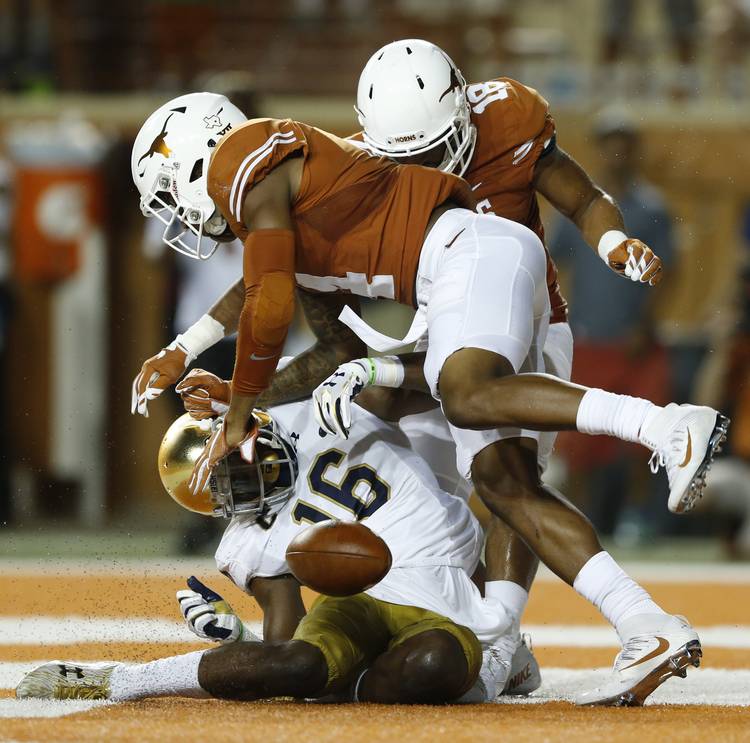 DeShon Elliott met with the media for the first time as a Texas Longhorn on Tuesday, and an apology was among the topics tackled by the sophomore safety.

In his second year in the Longhorn secondary, Elliott has accumulated eight tackles and a fumble recovery. Listed as free safety Jason Hall’s back-up on Texas’ depth chart, Elliott has arguably made the biggest defensive plays – a touchdown-saving hit against Notre Dame and a second-quarter sack against UTEP – in each of the Longhorns’ wins this season.

In Texas’ season opener on Sept. 4, Elliott prevented a touchdown with a hit on Notre Dame wide receiver Torii Hunter Jr., who dropped the football in the end zone. Hunter exited the game after being tended to on the field, and he then missed this past weekend’s game against Nevada with a concussion.

Elliott was not penalized for targeting on the play, which preserved a third-quarter lead in a game the Longhorns eventually won in double overtime.

“I tried to strike in the strike zone; I didn’t know I was that high up until after the game when I saw the video,” Elliott said. “I apologized to Torii Hunter… I’m glad they did not call targeting, though.”

If Elliott has received any grief from his teammates about the close call against Notre Dame, it paled in comparison to the reaction to his actions during last season’s meeting with Baylor. During Texas’ 23-17 win, cameras caught Elliott preparing to fight nobody in particular during an in-game skirmish. Elliott said that head coach Charlie Strong kept on him for a few days about the “shadow boxing,” and his teammates also gave him a hard time.

“They were on me for a minute,” Elliott said with a laugh.