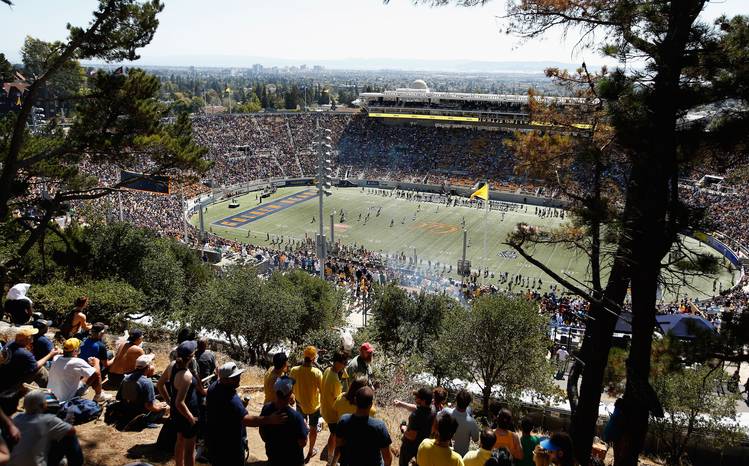 A general view from the hill overlooking California Memorial Stadium during the California Golden Bears game against the Grambling State Tigers on September 5, 2015 in Berkeley, California. (Photo by Ezra Shaw/Getty Images)

Texas exes out on the West Coast don’t see the Longhorns that often. But when they do, it’s spectacular.

As if that wasn’t enough, the Horns played for the 2009 national title in Pasadena. Two years later, Texas went west and thumped UCLA in Case McCoy’s first start as a sophomore.

Now comes a trip to the Bay Area and Saturday’s clash with California, a 1-1 outfit led by coach Sonny Dykes and quarterback Davis Webb, both of whom have Texas Tech bloodlines.

If the 11th-ranked Longhorns (2-0) learned anything last season, it’s that you must play well on the road. Stink it up against the Golden Bears, and coach Charlie Strong’s next practice might be over in Alcatraz.

“Just stay focused. Know why we’re traveling. It’s a business trip,” UT defensive end Charles Omenihu said. “We’re not coming here to play around. We’re coming to go and win. That’s the whole objective. If you stay focused on that, you’ll be alright.”

Thousands of Californians are banking on a memorable night. Texas sold its contractual allotment of 4,000 seats, and school officials requested 1,500 more. Those were gone in a flash, too. California Memorial Stadium holds 62,467.

The San Francisco Texas Exes alumni group is hosting various events and organized a shuttle from nearby San Jose. Some school officials plan on making a full tourist weekend out of the whole shebang in what is easily the regular season’s best road trip.

“I’m just excited to go out and play somewhere else and see what it’s like,” said freshman quarterback Shane Buechele, who has six touchdowns on his ledger thus far.

Thousands of Texas fans trekked to South Bend, Ind., last season for the 2015 season opener against Notre Dame. Those folks had to feel dejected after witnessing that 38-3 shellacking.

Fans in the Dallas-Fort Worth area were likely shellshocked during last year’s game at TCU. It was over literally within minutes as TCU built up a 30-0 lead by the end of the first quarter. Thanks to Lorenzo Joe’s late, meaningless touchdown, the Horns didn’t get shut out. TCU won 50-7 on homecoming day.

Other disappointing journeys to Iowa State and West Virginia followed. The Horns couldn’t get past the Cyclones’ 47-yard line for three quarters. If not for a 23-17 win up the road at Baylor, Texas would have finished 0-5 in true road games last season.

Maybe that’s why there’s still some hesitancy by the entire UT fanbase about this team. Sure, the double-overtime upset win over the Irish was big. Last week’s mauling of UTEP was expected. How will this team perform on the road — far, far from home?

“I just feel like we didn’t bring the energy we needed to bring,” safety DeShon Elliott said of last year’s fiascos. “So first off, prepare the right way and then bring the energy. We’re not going to be at home. We’re away. So we’ve got to bring our own energy.”

There’s no difference in UT’s pre-game preparations home or away. All Marriotts look the same anyway. Strong will likely get players up and going early for a walk outside. Then, it’s breakfast, some meetings and taking it easy. Strong said he won’t alter the team’s pre-game schedule because of the late kickoff, which is 9:30 p.m. Central time.

The Horns are expected to be at full strength. All the starters who missed last week’s game against UTEP will be back in the lineup, including running back D’Onta Foreman, left tackle Connor Williams and right guard Kent Perkins.

Don’t expect the Bears to be worried. They escaped Austin last season with a 45-44 win even though Jerrod Heard racked up a school-record 527 total yards. Heard is now playing receiver while Buechele and Tyrone Swoopes work on their fascinating tag team.

“Anytime you have a big strong quarterback, that gives you an extra blocker,” said Dykes, who’s father Spike coached at Texas Tech. Sonny was an assistant there under Mike Leach. The whole family is full of dyed-in-the-wool Red Raiders.

“You’ve got a 250-pound tailback blocking for a 250-pound quarterback,” Dykes said of Swoopes’ 18-Wheeler. “Those are some big dudes.”

Webb started his playing career in Lubbock and missed the 2014 Texas game with an injury. He headed off for Berkeley, Calif., as a graduate transfer. Webb isn’t wasting any time in Cal’s spread offense. He threw 72 times against San Diego State last week for 522 yards and five touchdowns in a 45-40 loss.

“I never played in front of a tough crowd,” Buechele said. And this may not be a hostile one, either, what with all the UT fans expected. But it’s also Cal’s home opener, so best leave nothing to chance.

Time for the Horns to get away from friends, put on their headphones and start thinking about moving to 3-0 for the first time since 2012.

“In the locker room, you’ve got to have that right playlist,” Elliott said. “That playlist is going to get you right.”

Betting on the Horns: History says be wary of freshmen QBs in their first road game … right?