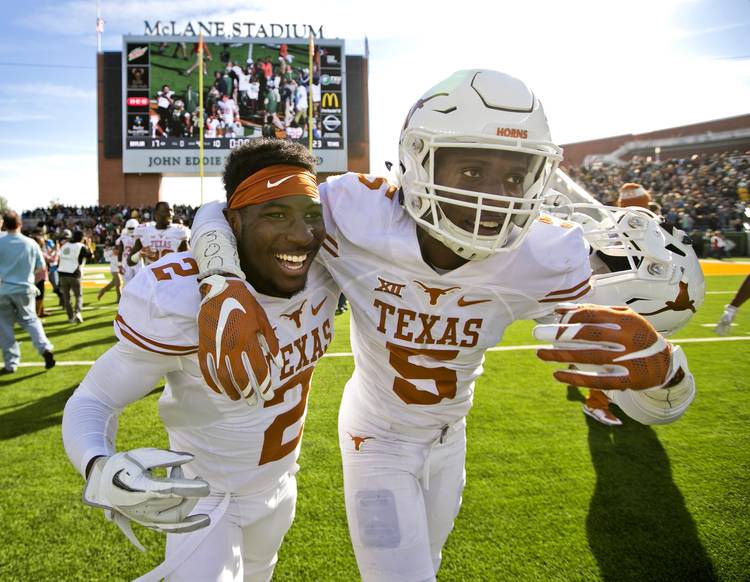 Coming out of high school, DeShon Elliott wanted to attend DBU — Defensive Back University, a school that some may refer to as Texas.

Other Big 12 schools like Oklahoma and TCU courted Elliott, a four-star recruit from Rockwall-Heath in 2015. But he said it was Texas that offered the chance to follow in the footsteps of NFL first-rounders Michael Huff, Kenny Vaccaro and Earl Thomas. Elliott, now a sophomore, and his fellow defensive backs aren’t on that level yet — “They have a long way to go to even mention those guys’ names,” defensive coordinator Vance Bedford quipped on Wednesday — but they are aware of the standard that’s associated with the nickname for UT’s secondary.

“We’re trying to get back to that level of DBU,” said Elliott, who has eight tackles and a sack through two games.

The Longhorns’ defensive backs soon will get their chance to prove themselves. They’ll face three of the top four quarterbacks in the country in terms of current national rankings for passing yards — Cal’s Davis Webb on Saturday (No. 2), Texas Tech’s Patrick Mahomes on Nov. 5 (No. 1) and TCU’s Kenny Hill (No. 4) on Nov. 25.

“I’ve never seen someone run those plays they did and have that much success,” Elliott said. “We’re going to really have to concentrate on technique and having the right eye placement and leverage and (knowing) your job. If you don’t know your job, the band is going to be playing. We can’t have that.”

Bedford said all of Texas’ defensive backs who make the trip to California will play. The Bears’ offensive personnel looks nothing like the one Texas met in last year’s 45-44 thriller in Austin; former Cal quarterback Jared Goff was the No. 1 pick of the NFL Draft, and Cal’s six leading pass-catchers from 2015 have moved on, too. Like Texas, though, Cal is averaging 45.5 points a game.

“We’re going to find out how much development we’ve had in a very short time,” Bedford said. The defensive backs will be tested on their on-field tackling and coverage abilities. But stopping Cal’s offense won’t just fall on the defensive backs. Texas, which has sacked eight quarterbacks, knows it must put pressure on Webb.

“Pressure — it gets him rattled. It would get any quarterback rattled,” sophomore defensive end Charles Omenihu said. “We’re just going to put pressure on him. Hopefully he throws bad balls and our DBs can go and pick it off and we’ll be celebrating on the sideline.”

After two games, defending against Notre Dame’s two-quarterback look and UTEP’s run-first approach, the Longhorns have seen only 51 pass attempts. The Longhorns have yet to intercept a pass, but their 155.5 passing yards allowed average also ranks 27th in the country.

Those numbers will be tested. Class is in session at DBU.

“They’ve been brought up in the whole DBU mantra, so they feel like whoever it is, they are going to give them their best shot,” senior wide receiver Jacorey Warrick said. “They feel like they can cover everybody. Since I came here, all the DBs, that swagger they have, it’s DBU.”

Betting on the Horns: History says be wary of freshmen QBs in their first road game … right?