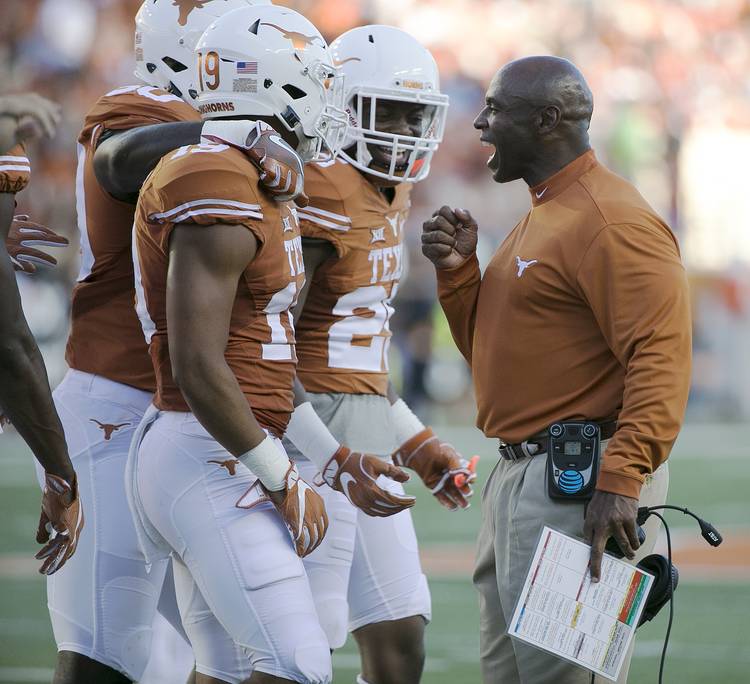 Every week this fall, we’re looking at a number related to Texas football. Today’s notable number is 21.

Twenty-one is the number worn on the jersey of Texas running back Kyle Porter. The longest of Texas senior Jacorey Warrick’s team-high nine catches so far is a 21-yard reception against UTEP. The school record for rushing touchdowns scored by a freshman tandem? That would be the 21 tallied by Jamaal Charles and Henry Melton in 2005.

Twenty-one also accounts for the number of times that Texas has been penalized this season.

Meanwhile, Georgia Tech, Navy, Purdue, Memphis, Stanford and Oregon State have only four penalties so far, though those last three have only played one game so far. Stanford has a nation-low 26 penalty yards; UConn has been docked only 36 yards in its two games.

So, are penalties a concern?

“They’re penalties that are really costing us, and they’re costing us big,” Texas coach Charlie Strong said. “It’s just they haven’t taken part in a win or loss yet. We have to get better and be a more-disciplined football team.”

Sixteen Longhorns have been flagged, and Strong took the blame for an uncredited sideline interference call against Notre Dame. Discounting that penalty, the Longhorns’ flags have been split almost evenly among the offense (seven), defense (six) and special teams (seven).

“We’ve waited so long to actually play other teams that sometimes guys just let their emotions take over and do things we wouldn’t normally do,” Warrick said. “We just have to stay disciplined.”

Eight penalties have been 15-yarders, including left guard Patrick Vahe’s chop block on a potential game-winning drive at the end of regulation against Notre Dame.

Not all of the penalties, though, have been as dire.

Senior defensive tackle Paul Boyette Jr. told reporters that after last week’s win over UTEP, Strong brushed off the 15-yard penalty drawn by Poona Ford when the defensive lineman bowed to the crowd after a third-down stop. Warrick said he joked with Devin Duvernay that the freshman’s first career catch, which was negated by an offensive pass interference call, was flagged not because Duvernay had committed an infraction, but because the officials couldn’t believe he was fast enough to get that open.

Strong, though, wasn’t laughing on Monday, and he said that he told his players they’ll run for penalties.

The players, though, are aware they need to cut down on the flags.

“Any penalty against us, we try to deduct,” defensive back Jason Hall said. “Overall, we try to minimize those.”

The rivalry resumes, at least for a night, as Texas sweeps Texas A&M in volleyball

Texas’ DBU to audit a class in California this weekend, with more big tests to come