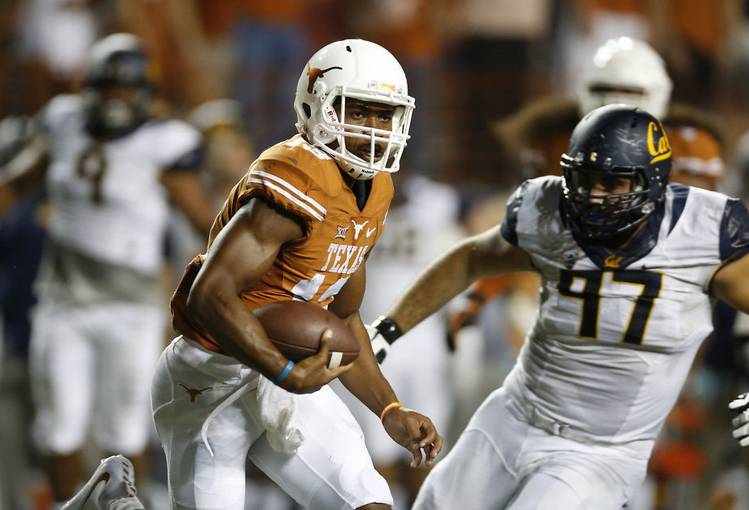 Cal quarterback Davis Webb has already thrown 126 passes this season, and his 72 attempts in last week’s game against San Diego State is 21 more passes than Texas faced through its first two games. Saturday’s spotlight will be on the Texas secondary, but can those defensive backs get an assist from the defensive line? Can Texas get enough pressure on Webb to add to his interception (three) or sack (four) totals? The Longhorns already have eight sacks, which are tied for 10th in the nation.

How will Texas look in its first road game?

After two wins at home, the Longhorns are hitting the road for the first time. If you count the Oklahoma games at the Cotton bowl and the 2014 Texas Bowl, the Longhorns are 5-8 away from home in the Charlie Strong era. In that same span, Texas averages 17.6 fewer points away from Royal-Memorial Stadium. This will be Cal’s home opener; the Golden Bears were 5-1 at their Memorial Stadium in 2015.

Will problems arise in the kicking game?

Considering last year’s Texas-Cal game was decided by a missed extra point, perhaps we should talk about the Longhorns’ kicking game. Trent Domingue is 3 for 3 on field goal attempts so far (from 22, 25 and 43 yards), but did have that one extra point blocked late against Notre Dame. Last year, of course, it was Nick Rose’s missed extra point that cost Texas a shot at overtime in the Bears’ 45-44 win. If Domingue is needed late Saturday night, will he avenge the ghost of Nick Rose?

What will Jerrod Heard do for an encore?

Heard, Texas’ sophomore receiver, is tied for second on the team with eight catches and is coming off a two-touchdown performance against UTEP. Cal fans, however, will remember him as the quarterback who produced a Texas-record 527 yards of total offense in last year’s shootout in Austin. Will he just be running routes on Saturday or will Texas find a way once again to showcase his arm and feet against the Golden Bears?

Our staff takes: This West Coast trip should be all business for Texas