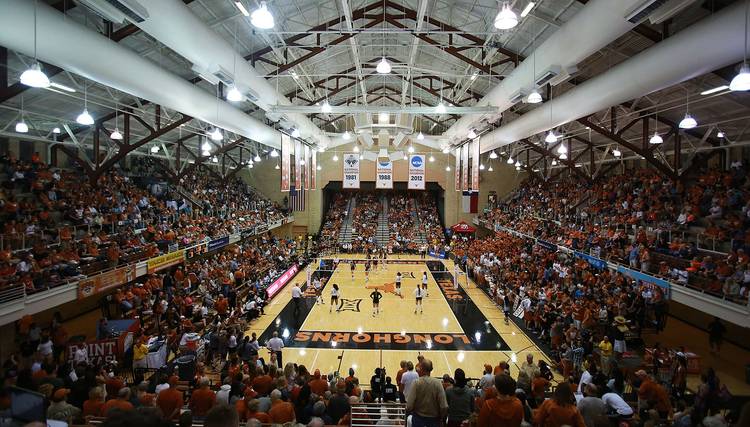 For Texas’ volleyball team, there is no place like home.

A sweep of Texas A&M on Wednesday gave Texas its 20th straight victory within the comfy confines of Gregory Gym, and the Longhorns have swept four of the five matches they’ve hosted this season. Texas was last defeated in its 4,000-seat facility by Florida, which earned a 3-1 win last season. (Florida later became one of four teams to lose a 2015 postseason match to Texas in Austin.)

Second-ranked Texas will be tested in its gym this month. Sixth-ranked Wisconsin (Sept. 18) and fourth-ranked Kansas (Sept. 24) are next up on Texas’ home schedule, and Texas A&M was ranked 16th.

“Our fans, they’re so awesome. They’re loud, they’re rowdy and our student section’s awesome,” senior setter Chloe Collins said. “The vibes they bring in Gregory Gym is just amazing, and we feed off of that. I think that’s truly why it’s just so hard to come in here because It’s a hostile environment that we bring.”

Texas announced Saturday that it still had around 550 tickets available for Sunday’s noon showdown with Wisconsin, but the school’s fan base got to showcase its potential against the rival Aggies this past Wednesday.

Tonight's A&M-Texas scene at Gregory Gym only bolsters my belief hoops should play one game in this holler house. pic.twitter.com/nNxc3wo6XZ

An announced crowd of 3,931 continually chanted “We are Texas” in unison with Texas’ offensive sets throughout the game (volleyball teams are allowed three touches before the ball must cross the net). The Longhorn Hellraisers were among those in attendance, and they were joined in shirtless spirit by a men’s swimming and diving team that celebrated points by stripping off multiple layers of clothing… until they got to their speedos.

“It just feels like the crowd is on top of you,” said senior outside hitter Paulina Prieto Cerame, who spent two years at volleyball-hungry Penn State. “It’s awesome, the loud noises and stuff like that. Our fans are definitely the best in the nation.”

Truth be told, Texas has been good at home and on the road this season. No. 1 Nebraska is the only team that can claim a victory over an eight-win Texas team, which has yet to be pushed to a fifth set.

Junior Ebony Nwanebu and freshman Micaya White are respectively averaging 4.65 and 4.17 kills per set, while Prieto Cerame’s 16-kill effort against Texas A&M boosted her average to 3.43 kills per set. Collins ranks third in the Big 12 in assists (11.3 per set).

On Sunday, Texas will host a Wisconsin team that improved its record to 7-1 with a sweep of Texas A&M on Friday. Senior Lauren Carlini (11.8 assists per game), junior Kelli Bates (4.6 digs per game) and sophomore Tionna Williams (1.7 blocks per game) all rank among the top three in the Big Ten in those statistical categories.

“They’ll be really good,” Texas coach Jerritt Elliott said. “They’re known for their passing and their defense, so it should be a lot more of a defensive game than what we saw (against Texas A&M). It’s a good opportunity for us to get back and get better.”