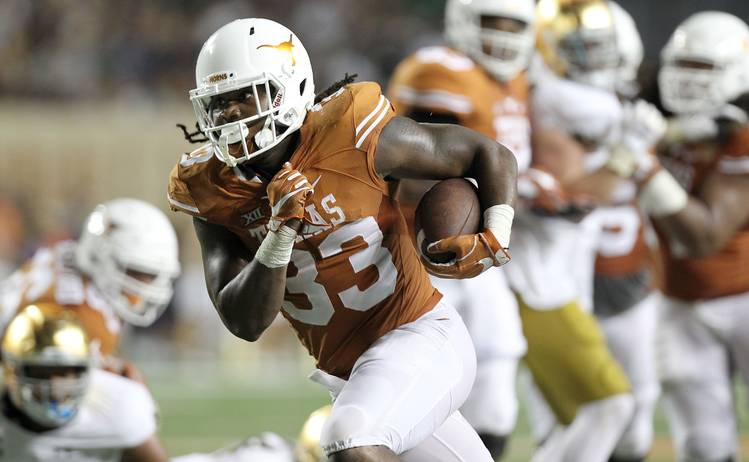 Running back D’Onta Foreman was held out of the UTEP game as a precaution, but he dressed anyway and could have played in an emergency. No need, though; Chris Warren III ran for 95 yards on 20 carries. Foreman should be charged up, especially to run against a Cal defense that’s allowed 582 rushing yards in just two games. The Golden Bears haven’t tackled anybody yet, it doesn’t appear. Texas also will be at full strength on the offensive line as left tackle Connor Williams and right guard Kent Perkins return.

Don’t expect UT’s freshman sensation to get rattled by the noise created in Cal’s home opener. After all, once you’ve played in front of 102,000 fans at Royal-Memorial Stadium with more than 11 million people watching on national TV, where does one get nervous? “I never played in front of a tough crowd,” Buechele said of his high school days. “My last playoff game, there was a lot of people there, but other than that, it wasn’t too crazy.” Expect offensive coordinator Sterlin Gilbert to call for some easy completions to get Buechele settled in early, and then the Horns can play on.

It may be difficult for either team to register a bunch of sacks. Both the Golden Bears and the Longhorns run a spread offense, which requires the quarterback to get rid of the ball quickly. Cal has allowed only four sacks so far while attempting 126 passes. Texas has given up three sacks in 55 pass attempts. Keep an eye on UT safeties Kevin Vaccaro and DeShon Elliott. They’ve both had sacks coming off the corners or on delayed blitzes. The Bears will have a difficult time with UT’s size. Those other two blitz at various times and give the Horns a numbers advantage.

Hansen, a junior, is a pass-catching dynamo. Quarterback Davis Webb has already connected with him 28 times for 350 receiving yards. Both numbers are tops in the nation. Hansen is Webb’s go-to player on third downs or in any tight spot, UT defensive coordinator Vance Bedford said. “He’s made some outstanding catches this year,” Bedford said. “Right now, we need to confuse the quarterback with different looks.” The Horns can throw a multitude of looks at Hansen with Davante Davis, Sheroid Evans or Kris Boyd. Holton Hill, who missed the UTEP game, is expected back.

Last year, this team struggled on the road. Texas didn’t even bother showing up at TCU. The Halloween trip to Iowa State was a complete disaster. The Horns are likely the better team in this matchup, which should not come down to an extra-point attempt again. So it’s incumbent on every Longhorn to have a business approach in Berkeley,  from tarmac to touchdown. If this team is going to have any serious success this season, it must play well away from Royal-Memorial Stadium, too.

Texas volleyball hopes home continues to be sweet against Wisconsin