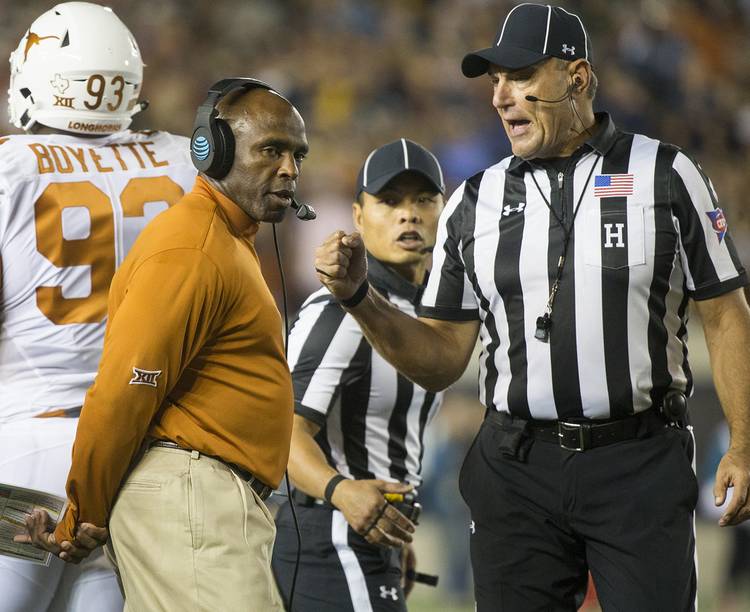 BERKELEY, Calif. — With the game on the line Saturday night, it was punter Michael Dickson — not quarterback Shane Buechele, or Tyrone Swoopes — who handled Texas’ final snap in the 50-43 loss to Cal.

The game officially ended when Cal quarterback Davis Webb took a knee at Texas’ 6-yard line, but the Longhorns’ final chance to tie the game was extinguished much earlier. Facing a fourth-and-10 from its own 21 with 2:10 left to play, Texas — trailing 50-43 — opted to punt.

Cal never gave the football back.

“We really can’t control that,” right guard Kent Perkins said. “We’ve should have executed on third down. It basically comes down to everybody doing their job when you play good teams like this. You can rarely make mistakes.”

Texas compiled 568 yards of offense, and the 43 points was just 2.5 points off the Longhorns’ average from their first two games. Cal, though, made a stand after Chad Hansen caught the game-winning touchdown with 3:41 remaining.

Trailing by seven points, Texas’ final drive began at its 21. A pass from Buechele to Jerrod Heard — the same Jerrod Heard who torched Cal for a school-record 527 yards of offense in 2015 — dropped the Longhorns back a yard. Buechele was forced to scramble for two yards on second down, and he was then sacked for a short loss on third down.

“If we get a (defensive) stop there and then we go back on offense and we do our thing, so no,” said Buechele, when asked if he was disappointed about the decision to punt.

Texas, however, didn’t get the stop. Texas burned its final two timeouts on the first two plays of Cal’s final drive, but Vic Enwere’s 54-yard run on third-and-1 sealed the victory. Enwere’s run featured a controversial fumble that was awarded to Cal at the 1.

Texas offensive coordinator Sterlin Gilbert said the decision to punt was simply “a decision we made. That’s what you do.” Head coach Charlie Strong noted that things may have gone differently had the Longhorns stopped Cal on that final drive.

Texas was 3 for 3 on 4th down attempts over its first two games, but the Longhorns hadn’t needed more than two yards on any of those attempts. The Longhorns weren’t given the chance in California to see if they could convert from farther.