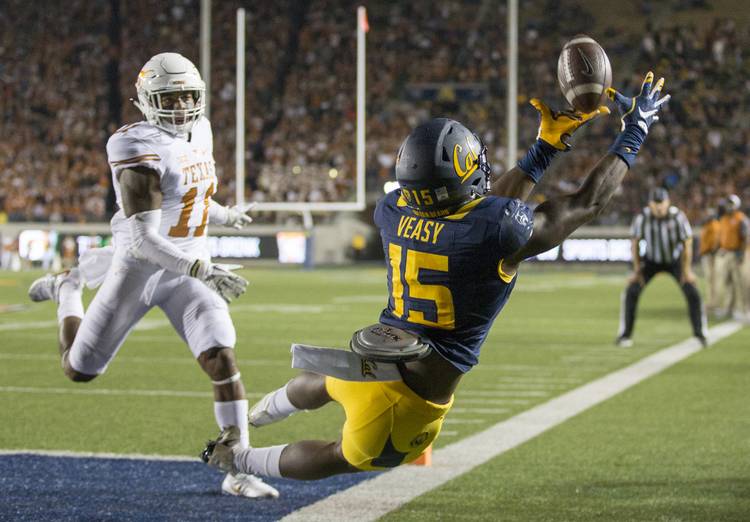 Cal wide receiver Jordan Veasy (15) grabs for the ball in the end zone against Texas during the first half pf the Longhorns' 50-43 loss to the Golden Bears. (RICARDO B. BRAZZIELL/AMERICAN-STATESMAN)

Nobody would buy that. Not after UT signed back-to-back top-10 recruiting classes.

Could it be the defensive scheme? The Longhorns are running Strong’s 3-3-5 base defense, but during the preseason, the head coach left no doubt that defensive coordinator Vance Bedford called the shots. “You hire coaches, that’s their job,” Strong said in August.

“It’s not a thing about talent or a scheme issue,” defensive tackle Paul Boyette Jr. said.

So if its not talent or the scheme, how did Texas look so inept defensively in a 50-43 loss to California?

The Golden Bears tallied up 507 total yards as quarterback Davis Webb threw four touchdowns, thanks primarily to UT’s busted coverages and lost one-on-one battles. According to players, it was the dreaded “lack of execution,” their go-to reasoning to explain whenever things go haywire.

“It’s not a talent issue. We’re the most talented team out there,” defensive end Breckyn Hager said. “It’s not a scheme issue. It’s an execution issue. We didn’t do what we’re supposed to do.”

The Longhorns, who despite falling to 21st in the most recent Associated Press Top 25 poll, are still a program on the rise. Sterlin Gilbert’s spread offense has breathed new life and hope into a program that’s been dormant since 2009.

UT fans probably wanted to see what would’ve happened on fourth-and-10 from the Texas 21 with less than two minutes remaining. Instead of going for it, Strong chose to punt and use his two timeouts, a decision that sealed UT’s fate.

“That’s a tough situation and deciding to punt was the decision we decided to make,” Gilbert said.

No, offense isn’t the issue. This defense appears to be holding the Longhorns back.

Challenging quarterbacks are everywhere in the pass-happy Big 12. A season that once looked so promising can turn on a dime if the Horns (2-1) can’t figure it out.

“I don’t think the defense will hold us back,” Strong said. “We just gotta get defensive stops and we gotta make plays on defense.”

Strong singled out Bedford in August, but he was having none of that inside California Memorial Stadium. “There’s no need in pointing fingers right now,” he said.

Strong demoted former play-caller Shawn Watson after the 2015 season opener when his unit wasn’t performing. That may not happen with Bedford, a Texas-ex and one of Strong’s confidantes who no longer deserves any benefit of the doubt.

“We should be able to play better,” Strong said, “and there’s no reason that we’re not playing better.”

Bedford hasn’t spoken to reporters after games since the 2014 UCLA game. Evans was the only defensive back made available to reporters after the game. The fifth-year senior was left to explain how even though everyone knew Cal’s Chad Hansen was a prime target, he still got loose for 12 catches for 196 yards and two touchdowns.

“We went over the plays they ran, and to see them execute and not us, it hits home, man,” Evans said. “I don’t want to say we felt helpless. We just didn’t execute. We shot ourselves in the foot. They weren’t doing anything special that we didn’t see on film.”

Texas’ secondary likes to bill itself as “DBU” — Defensive Back University. That moniker should be retired for the time being. “Our performance wasn’t DBU at all,” Evans said.

What’s more exasperating is that UT’s run defense has actually played well the first three weeks, outside of a few big runs. Against Cal, Vic Enwere had a game-high 54-yard run late and fumbled at the 1 before crossing the goal line.

A Pac-12 replay official determined UT safety Dylan Haines did not pick up the loose ball fast enough for the touchback. The play was ruled dead.

“Replay determined that there was no immediate recovery and that is replay’s sole responsibility,” said Big 12 referee Mike Defee, who led the on-field officiating crew. “Immediate recovery” is considered a judgement call, Defee said. Haines clearly picked up the football before it stopped moving.

Still, by rule, the ball reverts back to the offensive team. Cal took over at its own 1 and ran out the clock.

Take away Enwere’s 54-yard run, and the Golden Bears had just 57 yards on 39 carries (1.5 average). The run defense, thought to be a problem area in August, is doing OK.

The back end is a different story altogether. Oklahoma State’s Mason Rudolph and Oklahoma’s Baker Mayfield will like what they see during film study in the coming weeks.

“We lost. Nothing was effective,” Hager said. “We didn’t prepare like we should have. It’s really the players’ fault. It’s our fault.”