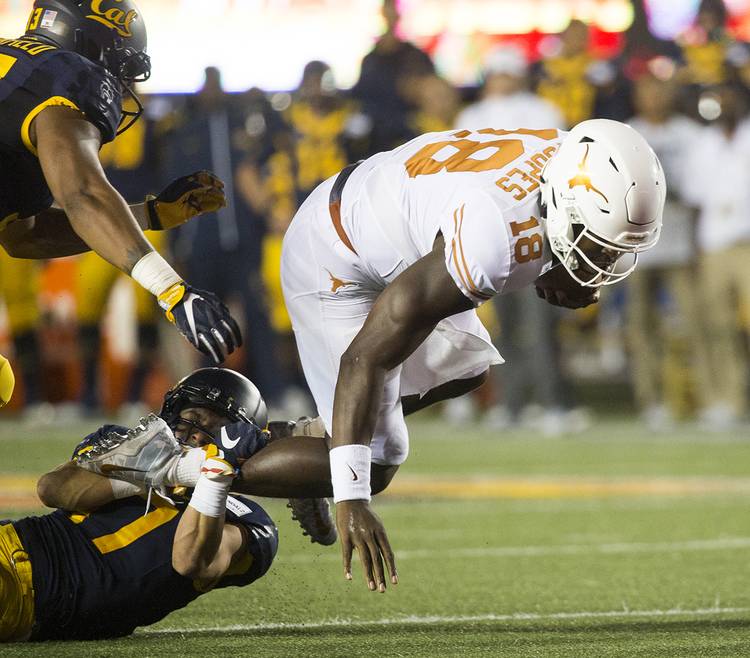 Texas Longhorns #18 Tyler Swoopes gets tackled by #18 Luke Rubenzer against Cal Golden Bears during the first half of a NCAA college football game, Saturday, September 17, 2016 at Memorial Stadium in Berkeley, California. RICARDO B. BRAZZIELL/AMERICAN-STATESMAN

BERKELEY, Calif. — Texas had only two turnovers on Saturday night, but both proved to be costly.

Shane Buechele and Tyrone Swoopes both were intercepted in the second quarter, and both turnovers set up Cal touchdowns. Chibuzo Nwokocha’s pick of Swoopes in Cal territory helped turn a Texas drive with a 24-14 lead into a five-play scoring drive for Cal. Later in the quarter, the Bears took a 35-33 lead two plays after Luke Rubenzer recorded a 45-yard return of a Buechele interception.

In the third quarter, Texas was done in by penalties instead of turnovers. Freshman Zach Shackelford’s holding call on the first drive turned a 1st-and-goal from the 7 into a drive that ended with a missed 49-yard field goal. On the next possession, Shackelford was flagged for a false start on a 3-and-3 near midfield. The Longhorns ended up punting.

Texas committed only two turnovers over its first two games. The Longhorns, though, were one of the most penalized teams in the nation.

Horns down: Cal junior Chad Hansen found a way to celebrate a touchdown catch that gave the Golden Bears a 35-33 lead in the second quarter. Once he completed the 23-yard play, Hansen flashed a “Horns down” signal with his hands.

The celebration wasn’t spontaneous. “Yeah, you know me and my friends before the game got together and said that may be something that I want to do, so yeah,” Hansen said.

Hansen had plenty to celebrate. The nation’s leader in receptions before this weekend, he turned 12 catches into 196 yards and two touchdowns.

Fun with the Foremans: Texas opened the second quarter with a six-play drive that featured twin brothers D’Onta and Armanti Foreman. D’Onta Foreman rushed four times for 41 yards, and he gave the Longhorns a 24-14 lead with a 4-yard score. Armanti Foreman had an incomplete pass thrown his way on the drive’s first play, and also gained 34 yards on an underthrown pass from Swoopes. (Cal was also flagged for a face mask on that play.)

D’Onta Foreman led the Longhorns with his 157 rushing yards and two touchdowns. Armanti Foreman caught four footballs and he turned in a team-high 72 receiving yards.

Odds and ends: The five starters that missed last week’s game against UTEP because of injuries — offensive linemen Kent Perkins and Connor Williams, tight end Caleb Bluiett, safety Dylan Haines and Foreman — returned on Saturday. Foreman was the only one who didn’t start. … Rouse graduate Billy McCrary III saw playing time in Cal’s 50-43 win, but the Austin area’s other representative on the Cal roster — Lake Travis defensive lineman Tevin Paul — did not play.

Third and Longhorns: Inside Texas-Cal