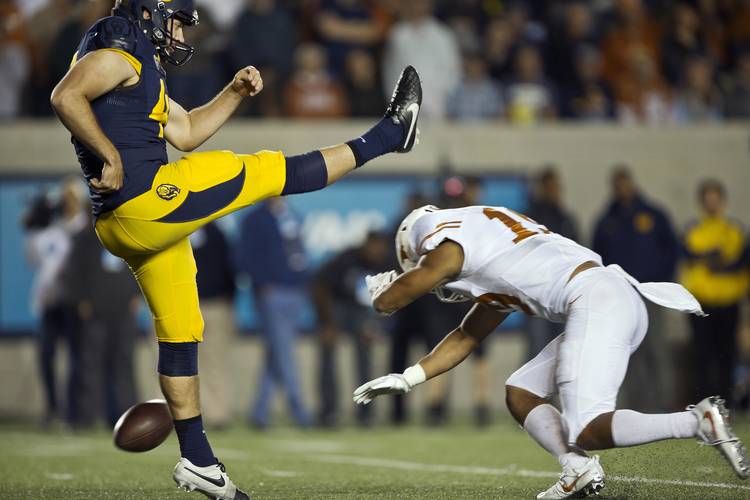 Texas freshman Brandon Jones (19) blocks a punt by Dylan Klumph (42) of the California Golden Bears for a safety in the second quarter on September 17, 2016 at California Memorial Stadium in Berkeley, California. (Photo by Brian Bahr/Getty Images)

BERKELEY, Calif. — Speaking of maddening moments Saturday night against California, the Texas special teams continues to be a mixed bag of wild success and equal bewilderment.

Graduate transfer kicker Trent Domingue had his most active game yet with four field goal opportunities. He connected from 38 and 35 yards, right in his sweet spot. But Domingue missed from 53 and 49 yards.

The misses shouldn’t have been too surprising. He struggled with longer distances while at LSU. Before coming to Texas, Domingue’s career long was 45 yards.

Michael Dickson averaged 43.5 yards per punt and put two inside the California 20-yard line. Oddly enough, that actually hurt his season average, dropping him to 50.4 yards per boot for the season. Now, he’s only third in the nation.

Three weeks in, freshman Brandon Jones is proving to be the best one of the most dynamic punt blockers around. He’s now slapped away two punts in two consecutive weeks. Against Cal, his blocked punt rolled out of the back of the end zone for a Texas safety, giving the Horns a 33-28 lead with 1:38 left in the second quarter.

Give the Horns credit for their blocking potential. Defensive end Naashon Hughes blocked a field goal against Notre Dame and Jones followed with blocks against UTEP and Cal.

Kickoff coverage has been pathetic since coach Charlie Strong arrived prior to the 2014 season. HIs first year, the Longhorns ranked dead last in Division I, allowing 30.1 yards per attempt. Last year saw marginal improvement. Texas was 122nd nationally as opponents averaged 26.3 yards.

Essentially, when kicker Nick Rose didn’t rocket the ball into the end zone for a touchback, look out.

This year is proving no different, only now Rose is gone. The Longhorns sit 87th nationally in kickoff return coverage after allowing Cal’s Khalfani Muhammad to get loose. Muhammad averaged 27.8 yards per return on six attempts with a game-high of 42 yards.

On the flip side, Texas coaches gave freshman Devin Duvernay plenty of chances. The speedster had six attempts as well for 130 yards (21.7 average) but never got it beyond the Texas 27-yard line.

Punt return has been borderline non-existent, although Strong generally doesn’t want gamblers back there fielding punts. Jacorey Warrick had just 24 yards on three attempts. One of those went for 19 yards.