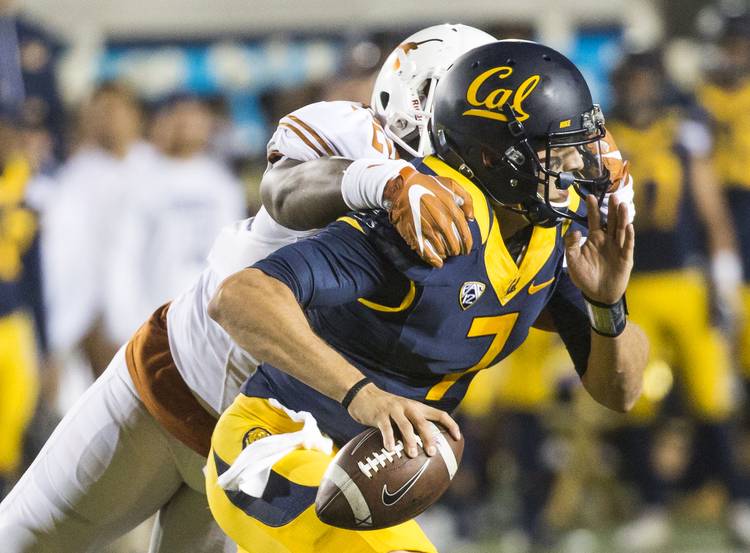 Texas Longhorns freshman Malcolm Roach (32) takes down Cal quarterback Davis Webb for a lost during the first half of a NCAA college football game, Saturday, September 17, 2016 at Memorial Stadium in Berkeley, California. RICARDO B. BRAZZIELL/AMERICAN-STATESMAN

The Cal quarterback got his yards (396) and his touchdowns (four), but he also was sacked three times and was hurried throughout the night. Paul Boyette Jr. forced a punt with a strong rush and tipped pass in the second quarter. Naashon Hughes had a sack as well as two Longhorns who played well against UTEP — Breckyn Hager and Malcolm Roach. Texas now has 11 sacks on the season.

HOW DID TEXAS LOOK IN ITS FIRST ROAD GAME?

Granted, Cal sported the country’s No. 2-rated passer and No. 1 pass catcher. But Texas gave up 507 yards of total offense, including a 396-yard passing night from Webb. If you count the Oklahoma games in Dallas and the 2014 Texas Bowl, the Longhorns are now 5-9 away from Royal-Memorial Stadium in the Charlie Strong era. Shane Buechele missed three series after an injury, and both he and Tyrone Swoopes threw interceptions that led to Cal touchdowns. But the secondary looked confused at times, the offense sputtered in the third quarter and Texas couldn’t close at the end. More pass-heavy offenses await in the Big 12.

DID PROBLEMS ARISE IN THE KICKING GAME?

Don’t forget, it was last year’s Texas-Cal game that ended with Nick Rose’s missed extra point in a 45-44 Bears win. This time, it was two missed field goals from Trent Domingue — one from 53 yards, another from 49 — that sure would’ve been nice to have had at the end of the game. Domingue did connect from 38 and 35 yards. Even Michael Dickson, who’s been booting 50-yard punts with ease, was held to a 43.5-yard average on his four kicks.

WHAT DID JERROD HEARD DO FOR AN ENCORE?

He had a quiet night.

Heard was held to two catches for 10 yards. He left the game in the third quarter, but returned in the fourth. He entered the game tied for second on the team in catches. Of course, it was against Cal last year that the former quarterback bumped Vince Young from the UT record books, producing 527 yards of total offense in last year’s shootout in Austin. The Bears were having none of that Saturday night.

Texas volleyball hopes home continues to be sweet against Wisconsin