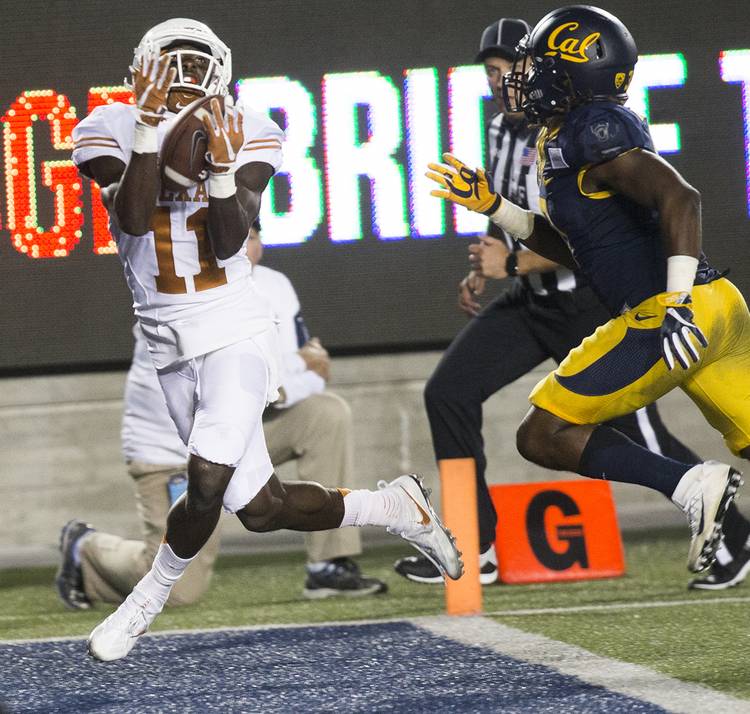 WHY TEXAS (2-1) LOST: On a night when the Longhorns really needed the defense to shine, Texas gave up too much to Davis Webb and Chad Hansen, his favorite target. Shane Buechele tasted his first moments of adversity, missing three drives after an injury scare, throwing a costly interception that led to a Cal touchdown, and then not being able to move the chains on Texas’ final possession. Penalties doomed two third-quarter drives. The running game flourished as expected, producing two 100-yard backs, but the Longhorns ended up on the wrong side of the shootout to Cal for the second straight year. These last two games have produced 182 combined points.

WHY CAL (2-1) WON: If it’s going to be a shootout, Davis and Hansen are good to have on your side. Neither disappointed. Davis threw for nearly 400 yards, didn’t turn the ball over and picked apart the Texas secondary. Hansen had nearly 200 receiving yards, added a 2-point run and had scoring catches of 23 and 12 yards. It wasn’t perfect, but a win’s a win. Cal likely will have to win more of these type of games in Pac-12 play.

THE EYES OF TEXAS: … were on three specific Bears — Webb, who was the nation’s second-leading passer entering the weekend and coming off a 522-yard, five-touchdown game; wide receiver Chad Hansen, Webb’s favorite target whose 28 catches led the nation through two games; and kicker Matt Anderson, who had kicked the third most field goals (five) entering this weekend.

Webb was 27 of 40 for 396 yards and four touchdowns, with no interceptions.

Hansen had 12 catches for 196 yards and two touchdowns.

Anderson didn’t attempt a field goal, but was perfect on his six extra points.

Defense: Anthony Wheeler. Led the team in tackles (10) and nearly produced a huge play when he stripped a Cal player of the ball that Kevin Vaccaro ran back for a long return. But replays called the play back.

(1) We all thought Texas would be able to run on Cal. But Foreman and Warren looked especially effective running behind a full-strength offensive line. Warren got the start, Foreman played at the end.

(2) Brandon Jones blocked a punt for the second straight week. This time, it resulted in a safety.

(3) Jacorey Warrick had a nice night, separating himself from his defender as Buechele’s long pass came in on the 41-yard scoring play. He’s starting to have that John Harris-type of feel to his senior year.

TEXCETERA: Tyrone Swoopes became the 13th player in UT history with 3,000 career passing yards. And he moved into sixth place on UT’s career rushing yards list for quarterbacks. … Warrick’s 41-yard touchdown catch, only the second score of his career, was the longest catch of his career. … Jones is the first Longhorn since Mykkele Thompson in 2012 to block two kicks in the same season. Aaron Williams holds the UT single-season record, with four blocked punts in 2008. … Foreman’s 157-yard night tied his career high. It was Warren’s third 100-yard game. … Devin Duvernay recorded his first career catch; he had a catch last week against UTEP called back for offensive pass interference.

ON DECK: OFF WEEK — AND THEN OKLAHOMA STATE: Texas is off this coming week; the Longhorns will have media availability on Monday. Coaches likely will concentrate on recruiting. Texas returns to action Oct. 1 at Oklahoma State, with kickoff time and TV information still to come. But consider this: The visiting team has won the last seven games in this series.

RELATED COVERAGE: Decision to punt late in game backfires on Texas in loss to Cal