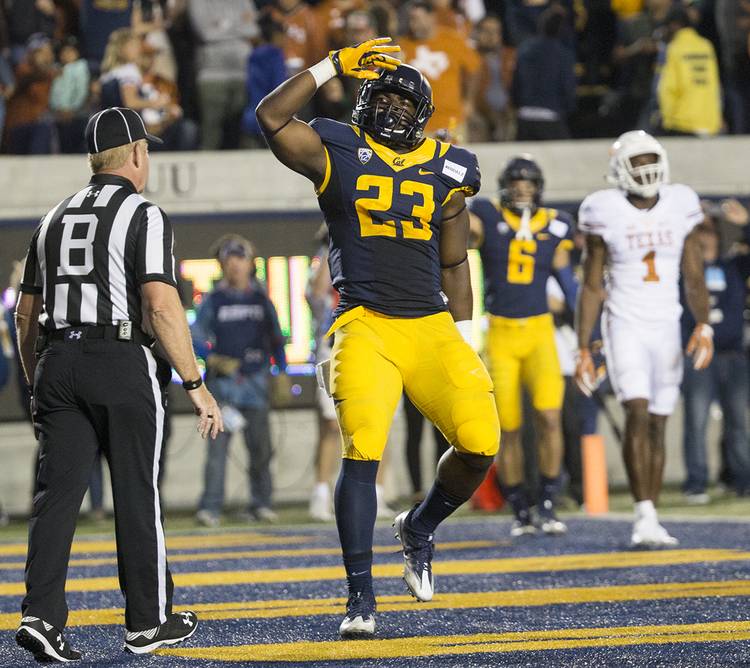 Cal Golden Bears running back Vic Enwere celebrates touchdown agains the Longhorns during the first half of a NCAA college football game, Saturday, September 17, 2016 at Memorial Stadium in Berkeley, California. RICARDO B. BRAZZIELL/AMERICAN-STATESMAN

Texas safety Dylan Haines had the right instincts to pick up a loose football in the closing minutes against California. After all, he dropped the ball before scoring as a senior at Lago Vista.

Haines said looked around and flipped running back Vic Enwere’s fumble to game officials with more than a minute remaining against Cal. Everyone on the field — the Longhorns, Golden Bears and Big 12 officials — all believed he scored.

Pac-12 replay officials upstairs were the ones who took a second look and determined Enwere had not broken the plane of the end zone. By that time, by rule, it was too late to give the Longhorns the ball at the 20-yard line with more than a minute remaining.

“Obviously I was chasing after the guy, and I could tell he had dropped it very close,” Haines said on Monday. “I didn’t know if it was in the end zone, but you’ve seen plays like that before, starting with (former Philadelphia Eagles receiver) DeSean Jackson.

“So I kind of went over there and feeling that if anyone was going to get the ball, I want to pick it up,” he added. “I actually thought about running it, but the ref looked at me and said, ‘Hey, toss me the ball.’ So I tossed it to him and thought, ‘OK.’”

Haines said he did the exact same thing in high school. As for why, Haines said, “You kind of get caught up in the moment. you can’t really explain it.”

What did the Lago Vista coach think? “He wasn’t happy.”

The rules benefitted Lago Vista and Cal. Both offenses got the ball back at the 1-yard line. Cal coach Sonny Dykes ordered quarterback Davis Webb to take a knee and run out the clock.

“We ruled touchdown,” Big 12 referee Mike Defee told a pool reporter after the game. “He has video evidence that the ball was fumbled short of the goal line. Once he determines there was no immediate recovery, by rule, the ball is returned to the team last in possession at the spot of the fumble, which is the 1-yard line.”

Texas players not blaming each other following loss to Cal