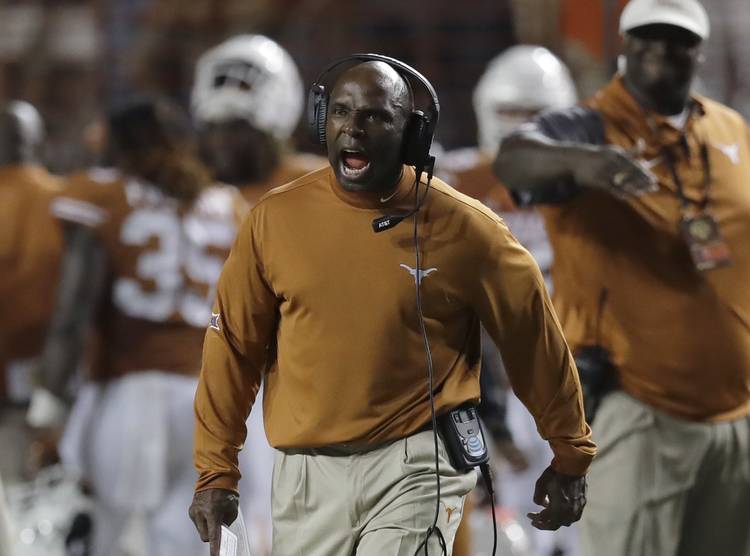 Texas head coach Charlie Strong calls to his players during the second half of an NCAA college football game against Notre Dame, in Austin, Texas. One weekend has already changed the tone of the Big 12, and teams on opposite sides of the Red River separating Oklahoma and Texas. (AP Photo/Eric Gay, File)

Now 56 years old, Charlie Strong’s professional persona was built on hard-hitting defense. That’s how he rose through the coaching ranks, won at Louisville and eventually landed at Texas.

Considering the 21st-ranked Longhorns have turned the corner offensively, it’s doubtful he’ll sit back and let the defense foul things up now.

Strong never mentioned defensive coordinator Vance Bedford by name on Monday. However, with less than two weeks before the Big 12 opener against Oklahoma State, “Each coach will be evaluated and we’ll see where we go from here,” he said.

Strong has burned through seven assistant coaches so far in two-plus seasons. It’s doubtful Bedford, or anyone else, will be outright dismissed mid-season. The head coach made it clear he’ll be more involved in fixing a unit that’s allowed 104 points in three games, a figure tied for 105th nationally.

Earlier, on Monday’s Big 12 conference call, Strong was asked about the defense and said, “Where to start at?”

Poor tackling and too many big plays were two top issues. The Longhorns allowed 507 yards against the Golden Bears, 396 through the air. Receiver Chad Hansen had 12 catches for an astounding 196 yards and two touchdowns.

“No mater how much experience you have, there’s going to be breakdowns,” safety Dylan Haines said. “The other night was a few too many. There’s no right or wrong answer as to why that happened. It’s just something we’ll have to look at on film and see why certain people were thinking what they were.”

This is the same defensive scheme Strong installed upon being hired in 2014. Mysterious breakdowns should be first- or second-year issues. The knee-jerk reaction would be for coaches to make the scheme easier. Well, Texas coaches have already done that, apparently.

“If anything, the coaches have put it in a way where it’s easier to grasp because we’ve had some young people come in and play,” Haines said.

Defensive tackle Paul Boyette Jr. said, “I wouldn’t say we’re down. I think we’re frustrated because of a lack of communication.”

Strong sounds like a leader being crystal clear with his messaging to coaches. In calm, clear tones on Monday, Strong told reporters things that could have easily been said in Sunday’s coaches’ meeting — at ear-popping decibels.

“When we go out there, it’s all about demanding things get done,” Strong said. “Don’t say to me, ‘Well I told him.’ OK, if you told him something, he’s saying I’m not going to go do it or I just don’t care. Or he doesn’t understand it. We have to make sure that when we make a call or talk about installing, the players understand.”

Not only did Strong promises fixes, he said younger players will get more playing time.

That could mean more action for disruptive forces Breckyn Hager and Malcolm Roach, who have combined for four sacks the last two games. Freshman safety Brandon Jones, who has already blocked two punts, should finally get extended time in the secondary.

“I love Hager and I love Roach because of the energy and passion they bring to it,” Strong said. The coach said Jones was a play-maker who plays the game hard.

Offensive players were clear to point out there is no division in the locker room. Nobody was perfect against Cal. Quarterbacks Shane Buechele and Tyrone Swoopes both threw interceptions. Offensive linemen had some key penalties, and kicker Trent Domingue missed two field goals.

The only real solace is that Texas (2-1) is still undefeated in Big 12 play. A league title and major bowl appearance are still well within reach, especially in a down year for the league itself.

The Longhorns aren’t a fixer-upper anymore. But the defense does need to be fixed.

“We all have unlimited potential inside of us,” Strong said. “Let’s bring it out of us.”

Texas players not blaming each other following loss to Cal