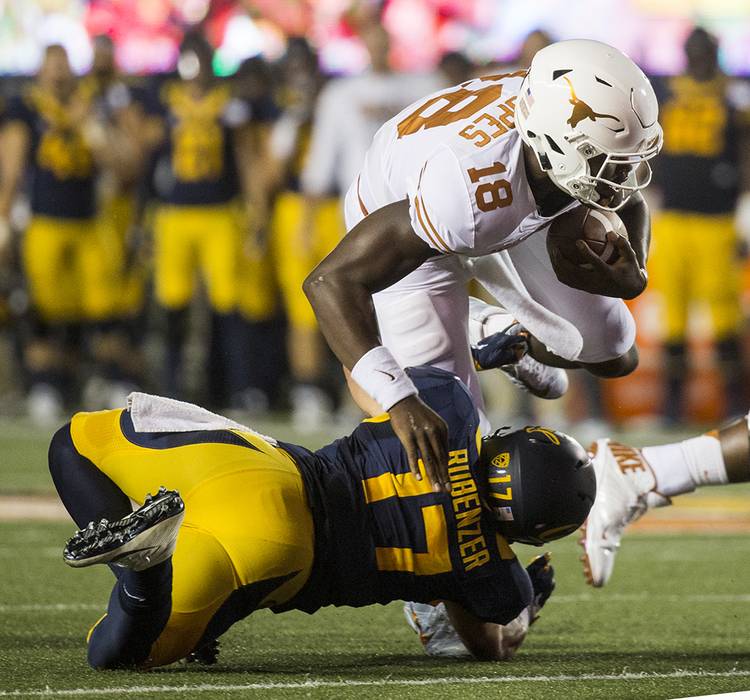 Texas Longhorns #18 Tyrone Swoopes dodges a tackle from #17 Luke Rubenzer against Cal Golden Bears during the first half of a NCAA college football game, Saturday, September 17, 2016 at Memorial Stadium in Berkeley, California. RICARDO B. BRAZZIELL/AMERICAN-STATESMAN

Following its 50-43 loss to California on Sept. 17 – a defeat that dropped Texas from 11th to 21st in the Associated Press’ poll – the Longhorns were not ready to play the blame game.

“When you lose, it’s easy to be selfish,” senior linebacker Timothy Cole said. “With this team, we started as a family. In bad times, you can always point fingers at someone but we’ve been pretty positive about this.”

The Texas offense and its 44.7 points per game rank 13th in the nation. The Longhorns, however, lost to California this past weekend despite a 43-point effort. The team also needed 50 points in order to survive its double-overtime duel with Notre Dame on Sept. 4.

Senior quarterback Tyrone Swoopes, though, declined on Monday to call out a defense that ranked among the nation’s worst (34.7 PPG). Swoopes even offered up some of the offense’s shortcomings, saying the unit needs to work on eliminating drive-killing plays. (Texas had two turnovers and two key penalties on Saturday).

No changes yet, but Charlie Strong promises ‘the defense will get fixed’