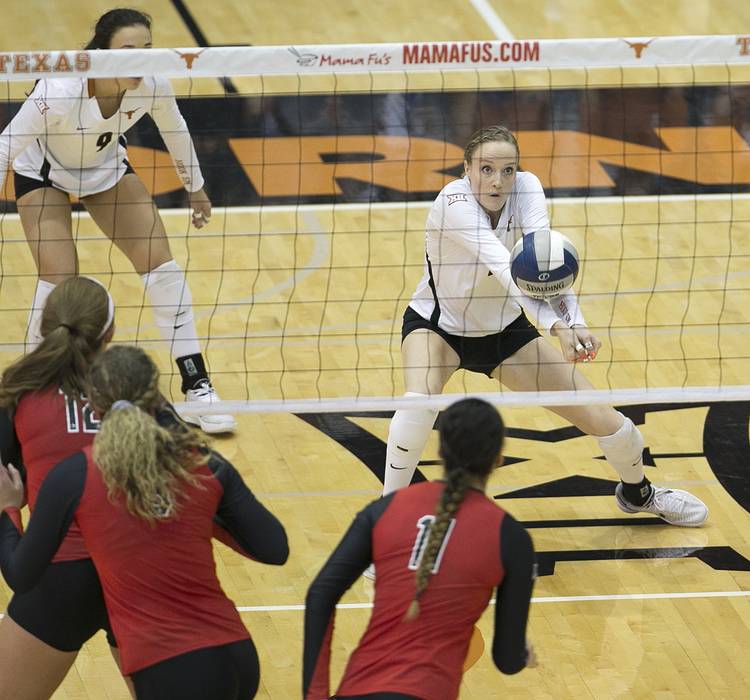 Texas survived an early volleyball scare from West Virginia on Tuesday, but the Longhorns eventually posted a 3-1 victory in their Big 12 opener. After dropping the opening set by a score of 26-24, Texas earned 28-26, 25-18 and 25-15 victories. Now comes No. 8 Kansas.

Fifth-ranked Texas (9-2) hosts Kansas (12-1) on Saturday. Juniors Kelsie Payne and Madison Rigdon, who starred locally at Connally and Pflugerville high schools, lead the Jayhawks with their 3.73 and 3.48 kills-per-set averages.

Tuesday night, Texas senior setter Chloe Collins, who ranks third in the Big 12 with 11.29 assists per game, missed the West Virginia match with an undisclosed illness, so the Longhorns had senior Nicole Dalton quarterback its offense. Dalton had appeared in a different role for each of Texas’ previous 35 sets this season, but she turned in 41 assists on Tuesday. It was a career-high for her; she twice tallied 25 assists in 2014.

Collins, as well as injured libero Autumn Rounsaville, are listed as day-to-day on Texas’ injury report.

On-campus adjustments: Texas’ baseball team opened its fall camp this month, and the Longhorns are adjusting to life under new coach David Pierce.

Sophomore Tyler Rand said Thursday that it was too early to compare Pierce to the recently-departed Augie Garrido, but some changes have been noticed around UFCU Disch-Falk Field. Among them is the Longhorns’ line-up; Pierce said that junior catcher Michael Cantu is the only Longhorn who had solidified his position and starting spot.

Texas, which went 25-32 in Garrido’s final year, will play a USA Baseball squad in Houston on Saturday. Senior outfielder Zane Gurwitz said that defense — or “hunting for outs” — was one thing the team is stressing during the fall.

“That’s something huge that can save our pitching,” Gurwitz said. “It’s these little things that add up to being ultimately a championship team.”

Game-winner: Freshman forward Tecora Turner was named the Big 12’s soccer freshman of the week on Monday. Turner came off the bench to score the game-winning goal on Sept. 18 in Texas’ 2-1 win over previously unbeaten UC-Santa Barbara. The goal was Turner’s first career goal.

Texas is set to head to Baylor and Oklahoma this weekend. This will mark the opening of Big 12 play for Texas, which posted a 6-3 mark in non-conference.

“We feel like we’re a top competitor in the Big 12, and we’re excited to go show that to everyone else,” senior Julia Dyche said.

First time for everything: On Monday, the Big 12 announced that Alex Rogers and Sandie Raines had won both of the conference’s cross country runner of the week awards. It was the first time that either runner won one of those awards, and it is the first time that Texas swept both honors during a single week.

Raines and Rogers were both winners last Friday at the Texas Invitational, which was held at Hancock Golf Course. Raines, a sophomore from New Braunfels, was timed at 15:05.55 in his five-kilometer race. Raines, a senior from Kingwood, captured her three-kilometer run with a time of 10:25.11.

With Raines and Rogers leading the way, Texas won both team titles at the Texas Invitational. The Longhorns will next run at the Notre Dame Invitational in late September.

Betting on the Horns: Texas faring well so far against a different kind of spread