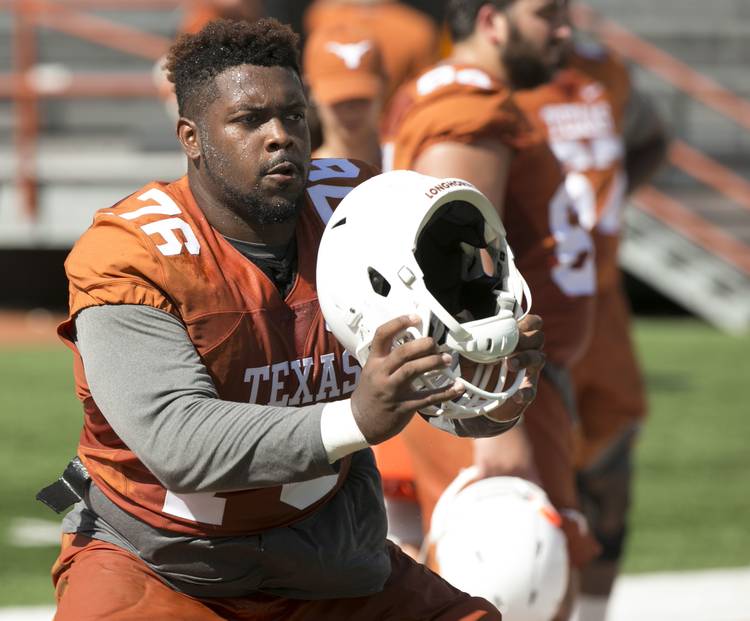 Texas starting offensive lineman Kent Perkins was arrested early Friday morning and charged with driving while intoxicated after he fell asleep in a restaurant drive-through and then crashed into a parking lot near campus.

Perkins, 21, was booked into the Travis County Jail just before 5 a.m. after authorities found the 6-5, 320-pound lineman asleep in a Raising Cane’s drive-through around 2:45 a.m., according to an affidavit.

A Travis County constable working overtime had noticed the line of vehicles at the restaurant growing longer and longer. He went to investigate and found a man asleep behind the wheel of a gray Dodge Charger, the affidavit said.

When the constable woke the man to tell him he needed to move, he drove away. The constable told investigators he then heard a loud crash to the south of the restaurant about 10 seconds after the car drove off.

The constable found the car wrecked in a parking lot on the east curb line of San Antonio Street. He grabbed the keys out of the ignition and called Austin police.

The officer who arrived found the driver, who was identified in the affidavit as Perkins, still asleep in the driver’s seat.

“(The officer) woke Perkins to speak with him and Perkins fell back asleep,” the affidavit said.

The affidavit said the officer pulled Perkins out of the car and could smell alcohol on his breath.

According to the document, a preliminary breath test taken at the scene of the crash showed Perkins’ blood-alcohol content at 0.178, more than twice the legal limit of 0.08. An intoxilyzer administered twice at the jail at 4:34 a.m. showed it at 0.125 and 0.135, the affidavit said.

Perkins was released from jail around 10:30 a.m. after posting a $4,000 bond, according to jail records.

In a statement, Longhorns head coach Charlie Strong said the team will make sure Perkins learns from the incident.

“We’re disappointed in his actions and take a strong stance against drinking and driving,” Strong said. “When you get behind the wheel after drinking, you not only risk your life, but the lives of others, and that’s something you just can’t do. We will make sure that Kent learns from this and handle any punishment once we have more information.”

On the field, Perkins, a senior from Lake Highlands, has been a key member of Texas’ offensive line, bringing experience to a largely inexperienced group. He started against Notre Dame and Cal at right guard. He missed the UTEP game with an injury.

Strong has said players can lose scholarships by breaking one of his five core values: Be honest, no guns, no stealing, no drugs and players must treat women with respect.

During Strong’s first season as head coach in 2014, two players were dismissed from the team following an alleged sexual assault in the dorms, and eight others were eventually dismissed for violations of team rules.