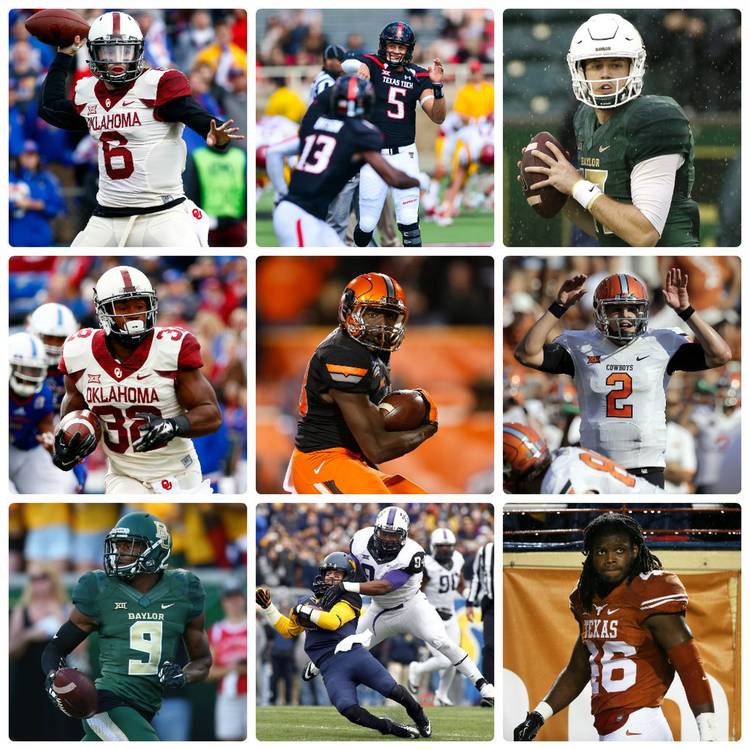 Here’s how the Longhorns have fared in the Big 12 in recent years, going back to the 2010 season:

Texas’ last game had the Longhorns going up against the country’s No. 2-rated passer and the No. 1-rated receiver. And the next game will have them going against one of the Big 12’s best passers (Mason Rudolph, 71-114-1,017, 6/1) and receivers (James Washington, 19-399-3). The Cowboys were ranked 21st in the country heading into the season, dropped to No. 22 after their first game and then fell out of the poll after their 30-27 home loss to Central Michigan. They rank ninth nationally in passing and are tied for 14th in scoring (44.3) but average only 25 minutes, 52 seconds in time of possession, which ranks 114th, and are giving up 382.7 yards per game, which ranks 69th. And the running game, which has struggled in recent seasons, is anemic again — 98 yards per game, or 119th nationally.

Remember when OU was being pegged for a second straight College Football Playoff appearance? Not anymore. The Sooners began the season at No. 3, tumbled to 14th after the opening-week loss to Houston and are now 25th — one of two Top 25 teams with a losing record (No. 23 Ole Miss is the other) — after last week’s home loss to Ohio State. Baker Mayfield (55-85-793, 7/2) is getting off to a slower than expected start, but Joe Mixon is fourth in the conference in rushing (29-235-1) and first in all-purpose yardage (181.7 yards per game). Texas has played Oklahoma tough in recent years, nearly upsetting the Sooners in Charlie Strong’s first season and obviously upsetting them last year. It was OU’s lone loss of the season before falling to Clemson in the CFP semifinals.

Remember Ames! That should be Texas’ mindset for this game, which will fall 35 days after the Longhorns’ previous game at Royal-Memorial Stadium. The Cyclones’ shutout win over Texas on Halloween last year ranks as one of the lowest performances, if not the lowest, in the Strong era. The Cyclones are struggling offensively (115th in total offense, 115th in rushing, 77th in passing, 123rd in scoring) and defensively (110th in points allowed, tied for 95th in total defense, 105th against the run).

Texas’ struggles in Manhattan are well-documented — the Longhorns have lost six of the seven games they’ve played there and haven’t won at Kansas State since 2002. Texas’ last trip there ended in a 23-0 shutout loss. The Wildcats’ defense, through two games, ranked No. 5 in the country after the team fell to Stanford and beat Florida Atlantic. Junior linebacker Elijah Lee is one of the Big 12’s top tacklers.

Expectations for Baylor, which had gone 32-7 the past three years, were lowered after the offseason scandal and subsequent departures of head coach Art Briles and several highly regarded freshman signees. But the Bears were 3-0 before Saturday’s conference opener with Oklahoma State (with wins over lightly regarded Northwestern State, SMU and Rice) and have improved from No. 23 nationally to No. 16. Not surprisingly, KD Cannon is one of the league’s best receivers (24-352-4). The Bears still have offensive weapons, including Cannon, and rank in the national top 10 in total offense and rushing, but also in the top 10 in total defense, pass defense and scoring defense heading into this weekend.

On a schedule peppered with top quarterbacks, Patrick Mahomes rules them all. He’s already thrown for 1,493 yards and 14 TDs against only two picks. And don’t forget what he did to Texas last year, passing for 372 yards and two touchdowns to offset Chris Warren III’s big 276-yard rushing night. The Red Raiders are averaging 61 points a game, 15 points better than anyone else in the league.

The Mountaineers took a 2-0 record into Saturday’s game against BYU, which included a season-opening win over Missouri. Quarterback Skyler Howard trailed only Mahomes, TCU’s Kenny Hill and Rudolph in passing among Big 12 quarterbacks, averaging 321 yards per game, and Rushel Shell (32-174-1) is averaging 87 rushing yards per game.

This still is shaping up to be Texas’ easiest game of the year; the Jayhawks were 0-12 in David Beaty’s first season, including a 59-20 loss at DKR. Over the past seven years, Kansas went 4-57 in conference games. So far, statistically, there hasn’t been much to brag about.

Another Big 12 power that’s experiencing a 2016 drop. TCU was ranked 13th to open the season, fell to 15th after the first week and then dropped out altogether after a 41-38 loss to Arkansas. Still, the Horned Frogs are 2-1 after starting conference play with a 41-20 win over Iowa State. Texas A&M transfer quarterback Kenny Hill (88-135-1,035, 4/3) is one of three Big 12 passers with more than 1,000 yards. Linebacker Sammy Douglas is the Big 12’s leading tackler, with 25 stops. And defensive tackle Aaron Curry’s 2½ sacks lead the conference too. This year’s game falls on the day after Thanksgiving, also known as Black Friday. Whether that name spreads from shopping to Texas football, we’ll have to wait and see.