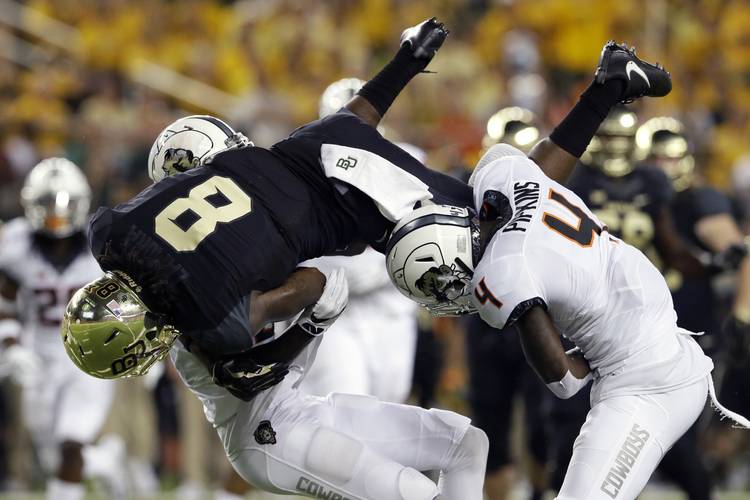 WACO — What the Big 12 needs are coaches who will make defense great again.

Nobody’s building any walls around here, either. Oklahoma State (2-2 overall, 0-1 Big 12) must face the same spread offense again this week against No. 22 Texas.

“There’s a lot of film getting tossed around right now of how to play the tempo or spread stuff,” Spencer said with a sigh. “Nobody’s going to let off the gas with that type of offense.”

At least Spencer is still gainfully employed. Notre Dame coach Brian Kelly dumped his defensive coordinator on Sunday. Brian VanGorder is out and defensive analyst Greg Hudson is in for the 1-3 Irish, a flawed outfit that still rang up 47 points against the Longhorns in the season opener.

“Our defense simply isn’t it where it should be and I believe this change is necessary for the best interest of our program and our student-athletes,” Kelly said.

It’s unclear whether Texas coach Charlie Strong will make any changes to his defensive staff after the Horns allowed 104 points in non-conference play. All assistant coaches “will be evaluated” during the off week, he said. Strong’s weekly press conference is scheduled for 11 a.m. Monday.

Nope, coaching up defensive football isn’t what it used to be. The Cowboys did a lot of things right against the Bears and still got mauled at McLane Stadium.

Knowing that Baylor wants a track meet, OSU showed incredible patience with its running game. The Cowboys ran the ball 55 times for 213 yards. Freshman Justice Hill had a breakthrough performance with 122 yards. He’s someone Texas coaches will have high on their scouting report this week, along with receiver James Washington.

However, the second half had just enough mistakes to doom the Pokes. Trailing by four, OSU’s Rennie Childs got stuffed on fourth-and-2 at the Baylor 4. On the next drive, Hill had runs for 7, 12, 38 and 12 yards. But as he was lunging for the goal line, Baylor knocked the ball loose and the Bears recovered at the 1.

“When you’re moving the ball and turn it over,” OSU coach Mike Gundy said, “you’re shooting yourself in the foot.”

Here’s a stat that will make coaches nauseous: OSU had the ball 41 minutes, 27 seconds and lost.

The Cowboys converted 12 of 20 third-down opportunities. And lost.

It’s all because the Bears had scoring drives that lasted 1:38, 1:48, 1:09, 50 seconds and finally a 99-yard march after the Hill fumble that took only 3:58. When the Cowboys stumbled, the Bears took off sprinting.

“I like the attitude of our offensive coaches because they are just going to go, go, go, until somebody says let’s slow down,” Baylor coach Jim Grobe said.

Texas isn’t the only secondary unit down on its luck. Russell threw a pass that skipped through Lynx Hawthorne’s hands and went straight to Ishmael Zamora, who raced 38 yards for a score. Then, Zamora simply blew past OSU’s Lenzy Pipkins for another touchdown.

OSU cornerback Ashton Lampkin bit on a double move by Baylor’s Chris Platt, who zoomed into the open field and caught an 89-yard touchdown pass.

OSU had no safeties within shouting distance twice, which allowed Baylor tight end Jordan Feuerbacher to get loose on a quick release and catch passes for 50 yards.

“Gotta give them more help,” Spencer said. “You ask yourself where could I give them help? And if you give them help, sometimes you’re giving up something else. Guys gotta make plays, and sometimes I’ve got to help them out more.”

Cornerback Ramon Richards was more pragmatic. “Football’s going to have one-on-one battles. You can’t always have help. You grow up playing football one-on-one in the backyard. That’s all this is,” he said.

Texas offensive coordinator Sterlin Gilbert most likely appreciated Baylor’s efforts. It gives him plenty of ideas for this week’s showdown in Stillwater.

The Longhorns’ defensive coaches have plenty to ponder, too.