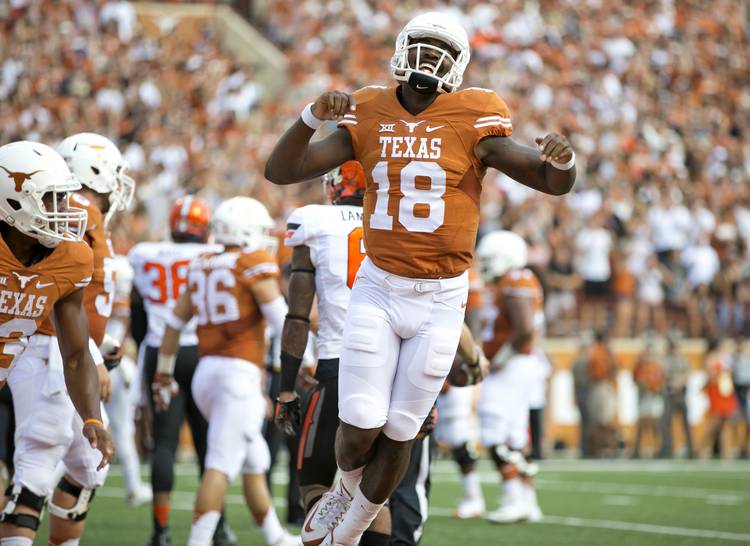 Texas senior Tyrone Swoopes has an anniversary to celebrate on Saturday.

Texas will travel to Stillwater, Okla., on Oct. 1 for a showdown with Oklahoma State. In last year’s meeting with the Cowboys – a 30-27 Oklahoma State win on Sept. 26, 2015 – Texas debuted its 18-Wheeler package. Normally Texas’ back-up quarterback, the six-foot-four-inch, 249-pound Swoopes is featured as the primary runner in a scheme that was named after his jersey number and running style.

In the 12 games since the 18-Wheeler package’s implementation, Swoopes has rushed for 14 touchdowns.

“I’ve always been comfortable in (this role),” Swoopes said. “It’s just more experience gives you more comfort with it. At this point, it’s just second nature to go out there and execute the play that’s called.”

Swoopes has rushed 21 times for 88 yards this year, and his three touchdown runs were recorded in Texas’ 50-47 win over Notre Dame. Most of Swoopes’ playing time has been situational, although he did relieve an injured Shane Buechele for a few plays against California on Sept. 17. Texas offensive lineman Connor Williams said the rotation of two quarterbacks – which is occasionally done in the middle of an offensive series – has not disturbed the team’s rhythm.

“Sometimes I don’t even notice they’ve changed,” Williams said. “I have belief in both of them and belief that both will do their job.”

Back to action: Charlie Strong sticks with Vance Bedford, ready for Cowboys