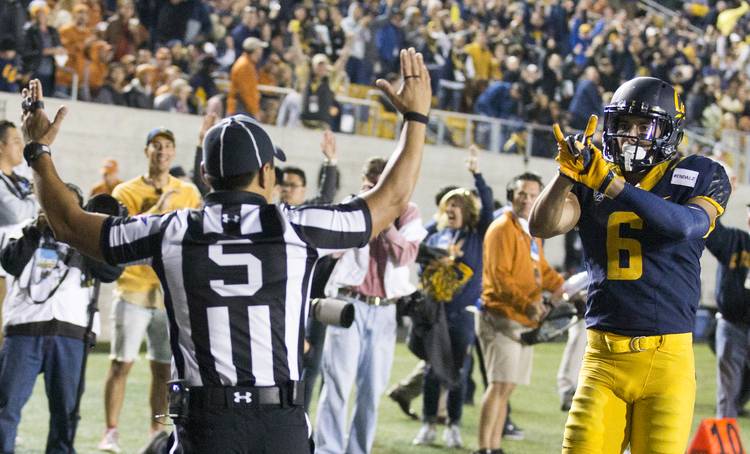 California receiver Chad Hansen celebrates touchdown against Texas Longhorns during the end of first half of a NCAA college football game, Saturday, September 17, 2016 at Memorial Stadium in Berkeley, California. RICARDO B. BRAZZIELL/AMERICAN-STATESMAN

Texas cornerback Sheroid Evans said the secondary unit spent the off week focusing on fundamentals, and the entire defense wants to take a positive step forward against Oklahoma State.

Evans himself struggled to stick with California receiver Chad Hansen, who had 12 catches for 196 yards and two touchdowns. The Longhorns had several busted coverage assignments and looked confused at times against the Golden Bears in the 50-43 loss.

“I was part of some bad highlights, man,” Evans said after Tuesday’s practice. “That’s something I don’t want on my resume. Just like a lot of guys, we’re working together to make sure we come out and execute.

Asked if it bothered him, Evans said, “I’m not going to lie, it really did. This is my last year. I waited so long for this year. I don’t want film like that. I’ll learn from it. I can’t beat myself up about it. I just have to put a chip on my shoulder and play ball.”

Evans echoed some of the comments made by other defensive players, who said there haven’t been many noticeable changes in this week’s preparation. Everyone has more focus, though.

The Cowboys are averaging 39.3 points and 466.8 yards through four games this season. OSU’s leading receiver, James Washington, is averaging 122 yards per game.

“We just need to bounce back,” Evans said. “We need to show everybody we’re better than we are.”

Staff takeaways: Strong made right call on Perkins; poor decisions have derailed careers of past Longhorns