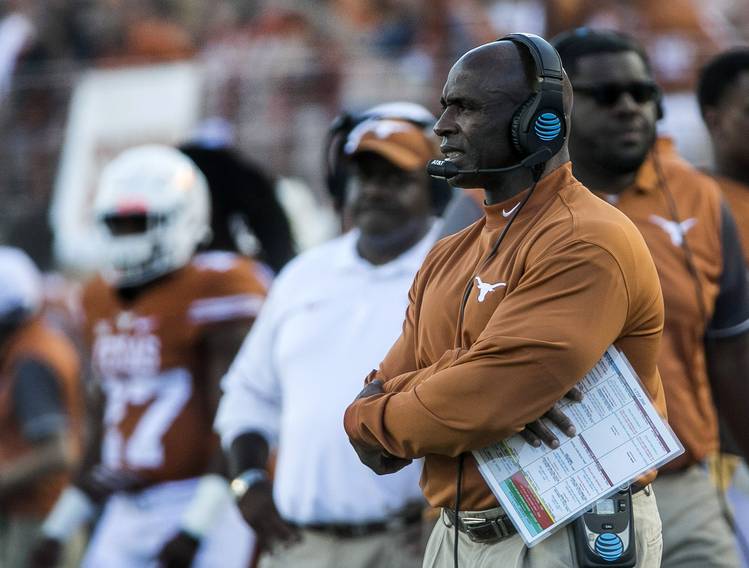 Charlie Strong can be criticized for a lot of things. Showing compassion and exercising proper judgment about his players’ off-field behavior is not one of them. Strong has dismissed players before who failed numerous drug tests and forfeited the right to wear a UT jersey. Kent Perkins definitely made a mistake when he was arrested for DWI. But in no way should he be outright dismissed. Perkins, 21, was remorseful and showed class during a public apology on Monday. He’ll sit out this week, one of several things outlined by Strong as punishment. But He still has Strong’s respect and that of those in the locker room. Everybody makes mistakes. It’s how we learn from them that make the difference.

Kent Perkins seemed somber but sincere as he addressed the media for the first time since his DWI arrest on Friday morning. Soon, though, the attention will shift to the depth chart; Texas now needs a right guard to block against an Oklahoma State defense that already has nine sacks. Sophomore left tackle Connor Williams was one Longhorn who expressed optimism about the line’s second-stringers. “What good teams put their pride on is depth,” Williams said. “We believe in all our players on our offensive line, and we believe some player is going to step up and be able to fill his spot.”

All in all, it was a very somber day. Part of that had to do with the first press conference after Kent Perkins’ arrest and part of it with an open date after the loss at Cal. We interviewed left tackle Connor Williams, who’s such a physical specimen and already so developed, you can’t help but think he’s going to be a great pro. Shane Buechele is lost in coach-speak and never speaks his mind. Paul Boyette Jr. and Breckyn Hager are the go-to guys for candid, honest comments on the team and also are two of Texas’ best players.

Listening to Kent Perkins speak about his DWI arrest caused me to reflect on athletes from the past that should have made it big in the pros but were derailed by poor decision-making in college that often involved questionable behavior off the field. Elite athletes like Sergio Kindle and Raymonce Taylor come to mind. But for every didn’t-make-it story, you have examples of players who weren’t high draft picks yet still made it. One of the best examples? Fozzy Whittaker is a great role-model who’s reaping the rewards that come from hard work and determination. Five years after blowing out his knee during his senior year, Fozzy Whittaker — an undrafted free agent — is in the second year of a $1.36 million contract with the Carolina Panthers.

Back to action: Charlie Strong sticks with Vance Bedford, ready for Cowboys

Sheroid Evans on Texas defense: ‘We just need to bounce back’