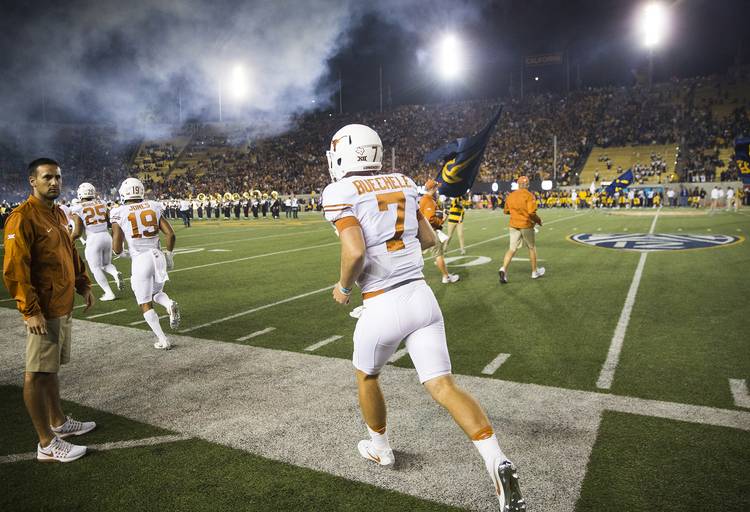 On paper, Texas quarterback Shane Buechele has been sensational through three games.

The freshman is averaging 240 passing yards per game and has thrown seven touchdowns offset by only two interceptions. Those numbers are similar to Baker Mayfield’s at Oklahoma. Buechele’s quarterback rating of 158.8 is fourth in the Big 12, four rungs higher than Oklahoma State’s Mason Rudolph.

With Buechele’s arm and a powerful running game, No. 22 Texas averages 44.7 points per game.

Still, offensive coordinator Sterlin Gilbert is taking it slow with his praise of Buechele.

“Again with him, it’s about progression and him getting better,” Gilbert said after Tuesday’s practice. “I’ll continue to say by no means do we have a veteran quarterback. You have a true freshman guy that’s three games in. He’s going to continue to grow. He’s a guy that’s motivated about that. He’s determined about being better.

“It’s just little things about throws, understanding situations about down and distance. Being able to manage the game at a high level.”

Against Oklahoma State, the Texas offense will be without suspended guard Kent Perkins. Gilbert did not specifically say who will go into the starting lineup, but the Longhorns have already rotated several players into the lineup in three previous games.

Alex Anderson (6-foot-3, 299 pounds) started in Perkins’ place against UTEP when the senior was injured. Anderson and Jake McMillon (6-3, 300) are both options.

“We do have guys who have gotten a lot of reps from (training) camp and early on in the season,” Gilbert said. “Those guys will go do a great job for us.”

Sheroid Evans on Texas defense: ‘We just need to bounce back’

Vance Bedford addresses the media ahead of Oklahoma State