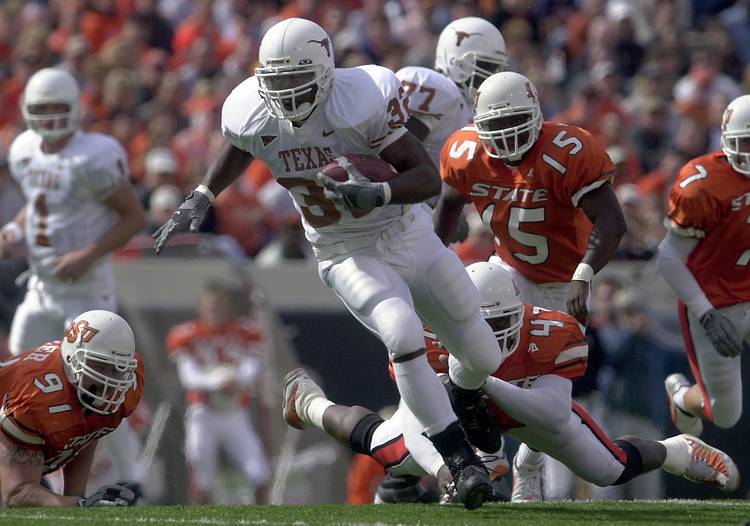 Former University of Texas standout running back Cedric Benson has been sued by a woman who says she and a dog she was walking in Northwest Austin were attacked by Benson’s two Rottweilers on July 18.

According to a lawsuit filed Wednesday in Travis County, Lynn Comegys was passing by Benson’s home on Creek Bottom when Benson’s dog knocked the woman down and then attacked the dog she was walking, a Maltese. Another Rottweiler, also owned by Benson, also went after Comegys’ dog, the lawsuit says.

Comegys has undergone continued medical care as a result of the attack and is suing for at least $200,000, according to her attorney. Jerry Comegys, the owner of the Maltese, is suing for the cost of veterinarian visits. Their attorney, Brooks Schuelke, wouldn’t give details about Lynn Comegys’ injuries, but he said the dog had surgery.

Schuelke said his clients filed a dangerous dog complaint with the city but that Benson didn’t show up to a Sept. 20 hearing.

This marks the third time Benson has gotten into legal trouble as a result of his dogs attacking people or other animals, after incidents in Wisconsin and Ohio.

“We reached out to him to try to resolve it and never got a response, so we had to resort to filing a lawsuit,” Schuelke said. “We’re most concerned about a pattern of his dogs having issues over the years. It’s important if you’re going to have a dog like that to take precautions to protect those around you.”

Benson’s attorney, Sam Bassett, said that Benson sent a letter of apology to Lynn Comegys and that Comegys declined Benson’s offer to pay expenses incurred as a result of the incident.

“Mr. Benson is sorry about what happened but could not do more to try to remedy the situation than he did back in the summer near the time when it happened,” Bassett said.

In 2013, Benson was ticketed in Wisconsin after sheriffs said two Rottweilers he owned attacked 17 calves at a farm. According to a report by HTR Media, a member of the farmer’s family alleged that he found the dogs biting the calves’ legs, and that several suffered “very deep wounds and possibly tendon damage.”

Two years earlier, in 2011, a woman sued Benson, claiming his dog attacked her and bit her breast while she visited his Cincinnati home.

Benson has also had legal issues involving alcohol. Most recently, in December 2014, he was charged with public intoxication after police responded to a verbal disturbance between a man and a woman riding in a cab on North Lamar Boulevard. The charge was later dismissed.

As a senior at Texas, Benson won the 2004 Doak Walker Award as the nation’s top running back and was selected No. 4 overall in the NFL draft by the Chicago Bears. He last played in the NFL with Green Bay in 2012.