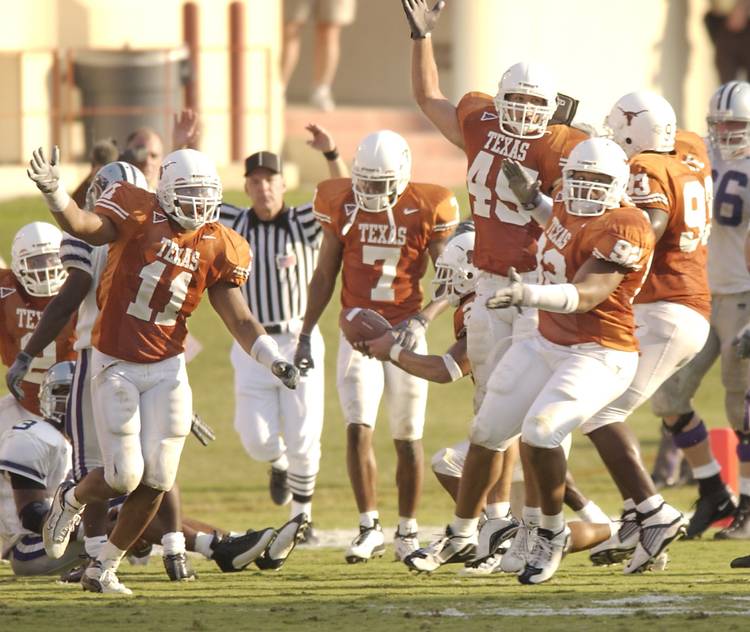 10/4/03 Sung Park/American-Statesman UT vs Kansas State second half action at Royal Memorial Stadium. The Texas defense celebrates a turnover by Kansas late in the fourth quarter. #22 Phillip Geiggar recovered the fumble by Kansas QB Ell Roberson. The drive after that play resulted in the game winning touchdown for Texas.

The University of Texas is 17-4 all time in Big 12 football openers. For the most part, Texas has cruised to wins, like in 1999 when they beat Baylor 62-0. There have been some major hiccups, like in 1998, when Kansas State bashed the Longhorns 48-7. And there have been a handful of memorable games.

With the start of Big 12 play, here are five times Texas began its conference 1-0 in style:

After three straight blowout wins to start the season, including a 66-31 road win over Ole Miss, Texas traveled to Oklahoma State and used a Joe Bergeron 2-yard touchdown run with 29 seconds left to take a 41-36 lead and eventual win. David Ash was 30-for-37 with an interception and three touchdowns, while Johnathan Gray and a handful of rushers combined for 136 yards.

This game is on here because of what happened in 2008. Texas Tech beat Texas famously after Michael Crabtree’s circus touchdown. It kept Texas out of the BCS National Championship picture and Big 12 Championship Game. Texas went on to beat Ohio State 24-21 in the Fiesta Bowl that season, but Texas’ lone loss of 2008 stung. The next year, Texas hosted Texas Tech in the first Big 12 game of the year. The Longhorns led 10-3 at halftime and 24-10 at one point. Tech cut the lead to seven with 6:58 to go, but a Hunter Lawrence field goal with 3:49 left put the Longhorns on top for good. Colt McCoy was human in the game, going 24-for-34 with two interceptions and 205 yards. Tre’ Newton led the Longhorns with 88 yards and touchdown on the ground.

Texas led 17-3 at halftime, but Kansas State rallied to take a 20-17 lead early in the fourth quarter. Vince Young, a freshman, led the Longhorns on what would be a game-winning drive by way of a 10-play, 88 yard march in 4:36 to take the lead, 24-20. The defense held strong in the final minutes, keeping Ell Roberson and Darren Sproles out of the endzone.  Young finished with 80 yards on the ground, but it was Chance Mock with 88 yards passing that threw the Longhorns’ lone touchdown.

Texas owns Oklahoma State in Stillwater. But in Austin not so much. Oklahoma State have defeated the Longhorns in Austin four times since 2010. This time, however, Texas hung on to beat the Cowboys (who were coached by Les Miles at the time). Chris Simms threw for 267 yards and was 24-of-46 with an interception and a touchdown in the game. Cedric Benson rushed for 117 yards, while Sloan Thomas caught seven passes for 130 yards. Texas led 17-3 late in the third quarter, but Oklahoma State scored the final 12 points of the game. A blocked extra point and a failed two-point conversion was all that kept the Longhorns from falling at home. Texas senior Rod Babers, who was key in the failed two-point conversion, picked off the game-sealing interception with 34 seconds left. It was the third pick of the game for the Cowboys.

The first Big 12 win ever for Texas came against a team who is no longer in the Big 12. Texas, coached by John Mackovic, took a 20-10 led into halftime and shutout the Tigers in the second half. Here’s who scored for Texas: Ricky Williams, Phil Dawson, Priest Holmes, Bryant Westbrook, Derrick Scott. Scott is the only Longhorn on that list who wasn’t either a first round pick or future NFL Pro Bowler. Williams scored two touchdowns and rushed for 112 yards.

Betting on the Horns: Texas has OSU right where it wants it — in Stillwater