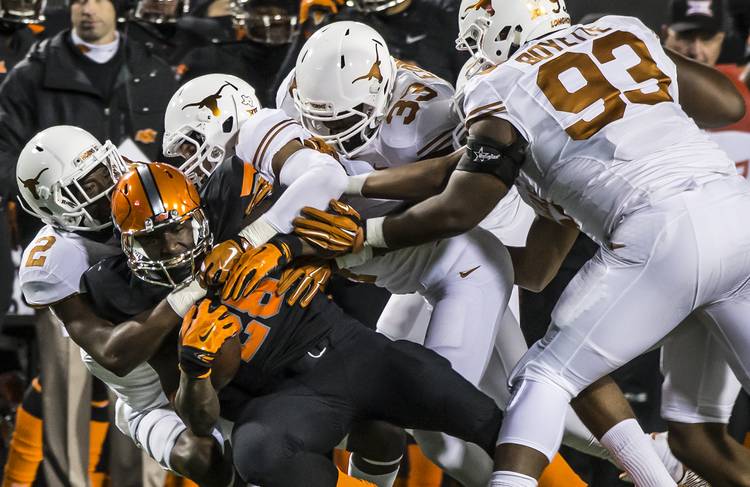 The 22nd-ranked Longhorns have enough talent at key positions. They’ve got a freshman quarterback who has looked as poised and composed as any senior. There are dynamic playmakers in the backfield and home run threats out wide.

The defense has issues, but what defense in this league doesn’t? On special teams, kicker Trent Domingue is solid and punter Michael Dickson ranks as one of the nation’s best.

Oh, there’s no question Texas (2-1, 0-0 Big 12) has enough juice to win the conference title this season, especially in a year that the league is down. But can the Longhorns do it?

Asked on Monday to build his case, Texas coach Charlie Strong said, “Hey, I say that to them. Why not? Why not us? You look what we have, and we’re a very talented football team. We can make an excuse as being young. There’s no excuse.”

In Saturday’s Big 12 opener at Oklahoma State, Texas must exorcise its own demons. This team has been its own worst enemy at times the last two-plus years, especially on the road. But the quirky thing about this series with the Cowboys (2-2, 0-1) is that the road team has won seven straight.

The Longhorns haven’t lost at Boone Pickens Stadium since 1997, the year OSU students tore down the goal posts with Toby Keith’s “Should’ve Been A Cowboy” blaring from the loudspeakers.

Texas quarterback Shane Buechele said he doesn’t want to talk about the Big 12 title. But he conceded the Horns “have the team to do it.”

“We’re a great team,” Buechele said, “and we have yet to show how good we can be.”

The Longhorns are 1-5 in true road games since the start of the 2015 season. The most recent road trip, a long journey to Berkeley, Calif., was a frustrating 50-43 loss that sparked two weeks of speculation about defensive coordinator Vance Bedford’s job security.

Strong said earlier this week that he’s sticking with Bedford, his longtime friend and coaching peer. Much was made about Strong saying he’ll be “more involved” with the defense. The players acted like that meant nothing.

Expect to see heralded youngsters Malcolm Roach and Breckyn Hager on the field early. DeShon Elliott and Brandon Jones should get playing time in the secondary, too.

In Stillwater, the defense will chase a quarterback who likes to put the ball on the ground. Oklahoma State’s Mason Rudolph has fumbled in three of the Cowboys’ first four games. It was a high point of emphasis during practice.

“I can’t speak for him, but I know if you hit a quarterback enough, they’re not going to like it,” said Hager, who has two sacks and ranks third with 17 tackles so far this season.

The Cowboys struggled to run the ball effectively in their first three games. OSU coach Mike Gundy showed incredible patience with his running game last week against Baylor, a team that prefers track meets. Freshman Justice Hill had 122 yards as OSU ran it a staggering 55 times.

Only problem was that Hill fumbled twice, once at the Baylor 1, and the Cowboys also turned it over on downs inside the 5. Those two major mistakes near the goal line cost OSU critical points in a 35-24 loss.

This week, the Cowboys are prepared for heavy doses of D’Onta Foreman, Chris Warren III and Tyrone Swoopes and the 18-Wheeler package.

“It’s the most physical Texas offense I’ve seen since I’ve been here,” said OSU defensive coordinator Glenn Spencer, who has been on Gundy’s staff since 2008.

Texas has a clear offensive identity. The Horns want to run the ball and pound folks into submission. That’s why Strong was so frustrated after the Cal loss. Any team that runs for 300 yards and scores 43 points should win easily.

Instead, Strong was searching for answers as to why Texas gave up 50 points and 500 yards.

And that brings us back to the original question. Yes, Texas has the talent to rattle off nine consecutive Big 12 victories. Oklahoma is mortal, TCU is rebuilding and Baylor isn’t perfect. The Horns have just as much, if not more, individual talent than every other team in the league.

It comes down to belief.

Does this team believe it can put all the pieces together week in and week out?

Have these players truly learned from all the near misses of the last year or so?

“We’re just like a jet taking off,” Boyette said. “Every game, we’ve got to keep building and keep climbing.”

Texas vs. Oklahoma State: Our staff takes on Saturday’s game