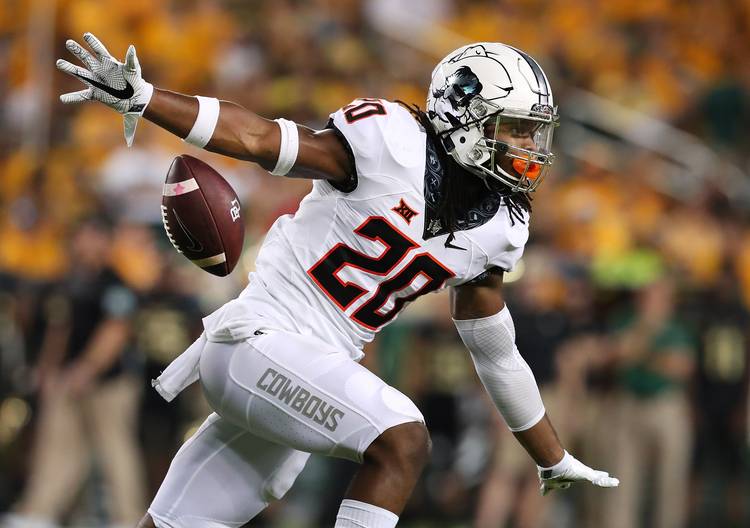 Oklahoma State's Jordan Burton celebrates after recovering a fumble against the Baylor Bears in the first half at McLane Stadium on September 24, 2016 in Waco, Texas. (Photo by Tom Pennington/Getty Images)

Each week of the season, the American-Statesman will interview the beat writer of Texas’ opponent. This week, the Oklahoman’s Kyle Fredrickson offers insight on Oklahoma State. You can find Kyle on Twitter at @kylefredrickson.

After last week’s loss to Baylor, should this Oklahoma State team still be viewed as a contender for the Big 12 title?

The silver lining in OSU’s loss in Waco is that Baylor wasn’t head-and-shoulders ahead talent wise. The Cowboys simply turned the ball over and its defense performed shoddy against the high-powered spread. Those are correctable mistakes in a year when the league is down, so OSU is still in the hunt.

Where should Mason Rudolph rank in the Big 12’s hierarchy of quarterbacks?

I’d say he’s tied with Patrick Mahomes and Seth Russell, one tier below Baker Mayfield. Rudolph has shown NFL-like touch on his deep fades and outs at times, but has also struggled with ball security as well. Has yet to reach his ceiling with a 6-foot-4 NFL prototype frame.

Since it has had a 100-yard rusher in two straight games, has Oklahoma State established a running game?

After two-plus seasons of mostly run-game mediocrity, OSU did take some small steps these past two weeks. The insertion of two new offensive guards, Larry Williams and Marcus Keyes, has provided a spark while freshman tailback Justice Hill and Rennie Childs have made plays in open space. It needs to continue for OSU to win on Saturday.

What is the biggest issue that this Oklahoma State defense needs to address?

Giving up the big play. It’s part scheme, part inability to cover in space against talented receivers. OSU must respect the run against Texas’ offense, but that will once again put the Cowboys’ defensive backs on an island. The give and take hasn’t blended well for OSU thus far.

Name one Oklahoma State player that Texas fans aren’t talking about — but should be.

Jalen McClesky. He stands 5-10, 170-pounds, but he’s quickly developed into a reliable slot receiver. McClesky is a redshirt freshman with breakaway speed who was trained by his father, a former NFL defensive back, in high school.

Finally, any restaurant recommendations for the Texas fans making the trip to Stillwater?

For the 21-and-up crowd, order a Limey at the Copper Penny on the strip. Eskimo Joe’s has great cheese fries, but hit Brooklyn’s downtown for dinner. Chicken and waffles are excellent.

The Big 12 looks winnable this year, but is Texas a team that can win it?