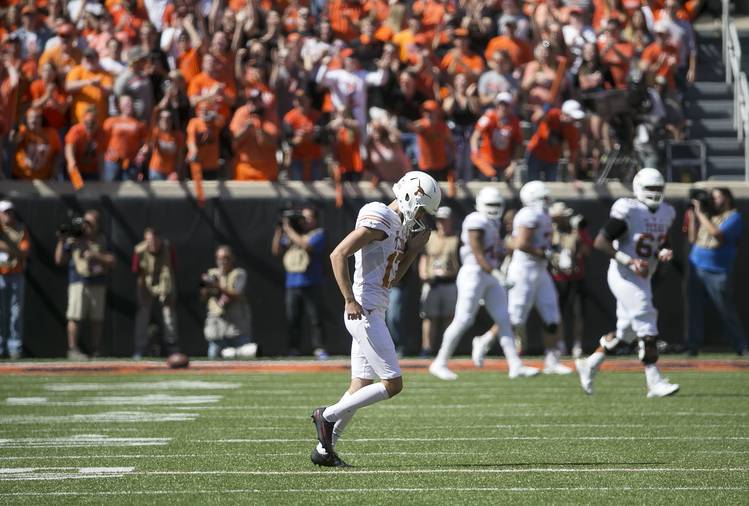 Texas kicker Trent Domingue hangs his head after another of his field goal attempts was blocked by OSU in the second quarter at Boone Pickens Stadium in Stillwater, Ok., on Saturday, October 01, 2016. Texas lost to OSU 49-31. DEBORAH CANNON / AMERICAN STATESMAN

STILLWATER, Okla. — Oklahoma State hosted a block party on Saturday that Texas made the mistake of attending.

The Longhorns had three extra-point attempts blocked in the first half of a 49-31 loss to Oklahoma State, and one of those blocks was returned for two points. Saturday’s debacle on special teams occurred less than a month after Notre Dame forced a fourth-quarter tie by successfully scoring off a blocked extra-point attempt.

So you can now add extra-point attempts — a play thought of by some as automatic — to the list of issues that Texas must fix.

“It’s just being able to cover your guy,” sophomore left guard Patrick Vahe said. “That’s the best thing that we can do so far, and it hasn’t worked out well so far for us. That’s something that we’re going to look over.”

Oklahoma State defensive tackle Darrion Daniels was credited with one of those extra-point blocks, but it was fellow tackle Vincent Taylor who caused the Longhorns the most fits. Taylor, a junior from San Antonio, blocked two of Trent Domingue’s kicks, including the first one that led to Tre Flowers’ two-point run-back return.

Taylor blocked a Southeast Louisiana field goal attempt in the season opener, and last year he blocked an extra-point attempt against TCU.

After the game, he said Saturday helped him get closer to a personal goal.

“That’s one of my goals that I have written on my mirror, is to get five blocked kicks,” Taylor said. “I’m at three right now in the fifth game. If I can just keep getting them; that’s something we practice every day and it showed today.”

Texas head coach Charlie Strong said that Oklahoma State was overloading the Longhorns’ guards on the post-touchdown attempts. Texas would engage with one of the oncoming Cowboys, only to open up a hole in the middle. Texas deep snapper Jak Holbrook, a 204-pound graduate of McCallum, was then left without much of a chance against the 310-pound Taylor or the 305-pound Daniels.

“That can be corrected,” Strong said.

As if the blocked extra points weren’t enough, Domingue also missed a 46-yard field goal wide to the left; it came after a five-yard delay of game penalty erased what would have been a 41-yard kick. And to add to the conversion miseries, Tyrone Swoopes was stopped short on a two-point conversion run after Texas had pulled to within 43-31 with 4:08 left in the third quarter.

The day wasn’t a complete special teams disaster, however. Poona Ford blocked an Oklahoma State extra-point kick, and Michael Dickson converted a first down off a fake punt.

On the missed two-point run try, Swoopes said the play clock — like the missed field goal after the delay-of-game penalty — played a role.

“It was just miscommunication,” Swoopes said. “We just weren’t all on the same page. I only had one second left (on the play clock), so I should have called a timeout, but I snapped it. That was my fault.”