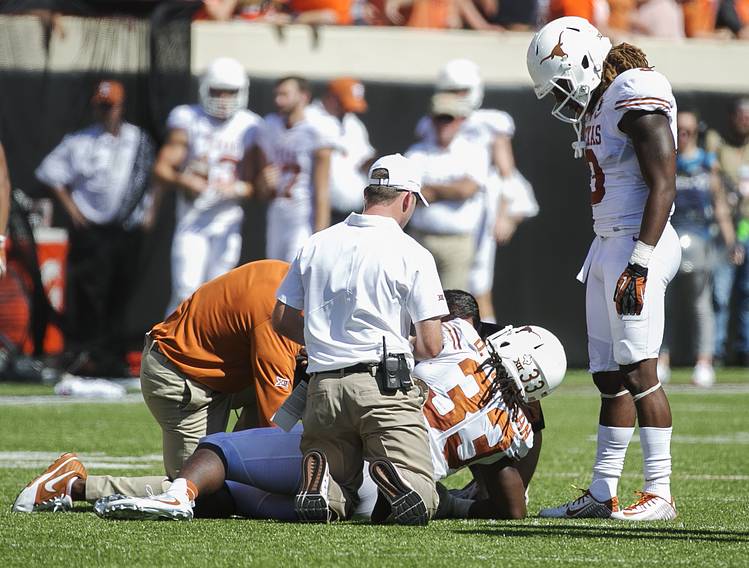 Texas's D'Onta Foreman (33) is checked on by trainers after a play against OSU in the fourth quarter at Boone Pickens Stadium in Stillwater, Ok., on Saturday, October 01, 2016. DEBORAH CANNON / AMERICAN STATESMAN

STILLWATER, Okla. — Texas found 329 rushing yards on the road, but the Longhorns headed back to Austin with concerns about their top two backfield options.

Chris Warren III suffered a knee injury late in the first half Saturday, and D’Onta Foreman later exited in the second half with an injury to his side. The injuries robbed Texas of two running backs who accounted for 254 yards and two touchdowns on the ground.

Diagnosed with an abdominal injury, Foreman said he would receive treatment and be evaluated this week. Texas coach Charlie Strong did not have an update about the severity of Warren’s injury.

“I wanted to be out there,” said Foreman, who ran for 148 yards and two scores. “I tried to do everything I could to get back out there, and it just didn’t work out there. I didn’t want to go out there and hurt it worse to where I was out (for longer).”

Texas quarterback Shane Buechele and offensive lineman Patrick Vahe declined to use the injuries as an excuse, saying that the team had enough depth to overcome the losses. Foreman and Warren, however, were respectively averaging 8.7 and 10.6 yards per carry, and they accounted for 44.7 percent of the team’s offense. Texas scored once after Warren was pronounced out at halftime.

Freshman Kyle Porter picked up 29 yards on seven carries. Six of his seven attempts came in the second half.

Throwing it around: Senior receiver Jacorey Warrick did not make the trip to Stillwater because of an undisclosed injury, so Buechele spread the football in the absence of the team’s leading receiver. Eleven Longhorns split the freshman’s 21 completions.

Gundy responds: Oklahoma State coach Mike Gundy told reporters that he didn’t have a reaction to comments that Cowboys super booster T. Boone Pickens made about the 12th-year head coach on an American-Statesman podcast this week. Gundy, though, did issue a response about Pickens in a later interview with “The Franchise”‘s John E. Hoover.

Gundy was quoted as saying: “I hate that he feels the way he does. I mean, I don’t know what to do. I just have to do my job. I can’t do anything about it. And you know what? At some point, if somebody feels it ain’t good enough, then hell, somebody else can come in here and try it. I mean, I’m good.”

Odds and ends: An announced crowd of 53,468 was on hand at Boone Pickens Stadium. Texas lost in front of a crowd of 50,448 at California on Sept. 17. … After the game, some OSU fans chanted “Beat OU” at Texas players as they walked to the locker room. Texas and Oklahoma play next Saturday in Dallas. … Sophomore punter Michael Dickson, who committed a critical punting error in last year’s 30-27 loss to Oklahoma State, averaged 45.2 yards over his five kicks on Saturday. And he picked up six yards and a first down on a fake punt. … Tyrone Swoopes’ two touchdown runs gave the senior quarterback his 15th and 16th touchdown run since Texas installed its “18 Wheeler” package in last year’s game against Oklahoma State.