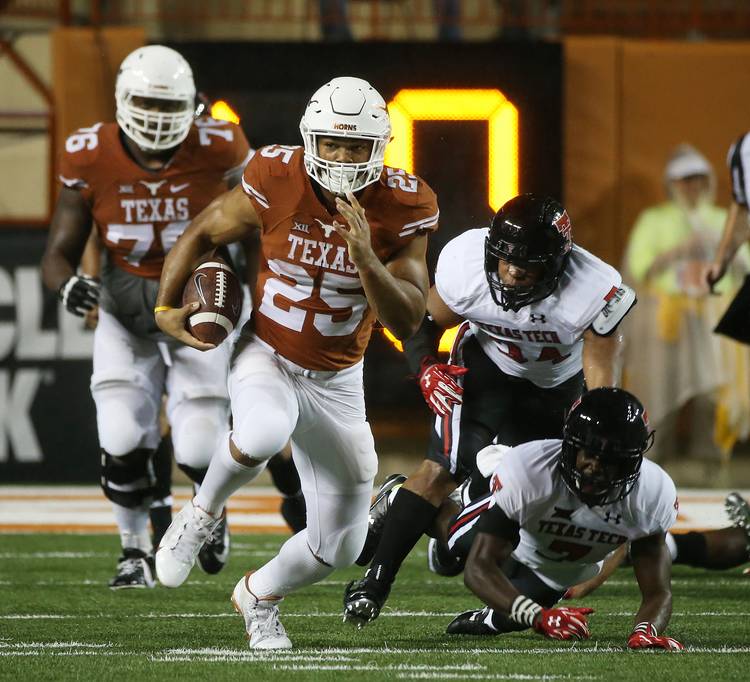 Cal junior Chad Hansen is leading the country in receptions, and 12 of his nation-leading 50 catches came against Texas. Washington, who’s led Oklahoma State in receiving the last two years, has half as many catches as Hansen but is averaging 19.5 yards per catch. And one of his three touchdowns was a 91-yard play. In his previous two games against Texas, Washington has had seven catches for 61 yards and an 8-yard touchdown.

The Cowboys boast the Big 12’s third-best rushing defense, allowing 143.2 yards per game. And 16 players have already combined for 35 tackles for loss. Only one Big 12 team is running the ball better than Texas — Baylor, which finished with 136 rushing yards in last week’s win over the Cowboys. Texas is rushing for 238.3 yards per game, leaning on D’Onta Foreman and Chris Warren III, but also will be without starting right guard Kent Perkins.

Will turnovers be a key? The Longhorns are still looking for their first interception of the season. Oklahoma State junior cornerback Ramon Richards, meanwhile, already has two this year; with seven career picks, the converted quarterback from San Antonio is five picks away from becoming OSU’s all-time leader. This week, he’ll try to bait either Shane Buechele, who has thrown two picks in his first 86 pass attempts, or Tyrone Swoopes (13 career interceptions) into another turnover.

Oklahoma State has allowed 14 sacks, and the 3.5 sacks-per-game average ranks 115th in the nation. Those numbers should be welcome news for Texas’ pressure-providing pass rush that has sacked 11 sacks (at 3.67 sacks per game, Texas is tied for 12th in the country). Breckyn Hager, Malcolm Roach and Kevin Vaccaro have each compiled two sacks so far, so an Oklahoma State line that starts a senior, three juniors and a freshman needs to keep an eye on those Longhorns.

Texas fans showed up in Berkeley two weeks ago, preventing the California Memorial Stadium crowd of 50,448 from becoming a hostile environment. But the comfy confines of Boone Pickens Stadium (60,218) offers a different test. The Big 12 allows visiting schools up to 3,850 tickets; Texas, however, has requested only 1,700 for Saturday’s game. The road team has won seven straight matchups in this series. Earlier this week, Texas receiver John Burt said, “I know that the fans are going to be right on us … I’m sure it will be a pretty electric atmosphere.”

The Eyes of Texas: Three Cowboys the Horns will be watching