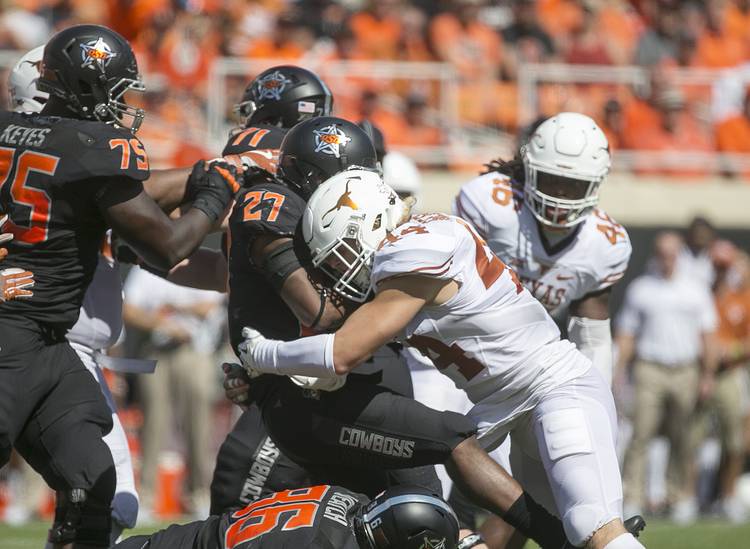 On Saturday morning, we asked four questions about the Texas-Oklahoma State matchup.

So THAT’s what it looks like to spend an off week fixing the defense? Texas gave up 555 yards, Mason Rudolph had a big day, and there were enough missed tackles, blown coverages and defensive secondary miscommunications to make Charlie Strong’s and Vance Bedford’s seats just a little hotter. Texas has now given up 50, 49 and 47 points in three of its first four games. Entering Saturday, the Longhorns were ranked 107th in the country in points allowed (34.7 ppg) and 66th in yards allowed (386.3). Texas gave up 49 points and 555 yards Saturday. It’s good to be an opposing offensive coordinator.

2. HOW DID THE OFFENSIVE LINE FARE WITHOUT KENT PERKINS?

D’Onta Foreman rushed for 148 yards and a pair of touchdowns, and averaged 8.7 yards per carry. Chris Warren III ran for 106 yards and averaged 10.6. Texas gave up only one sack. It’s not like the Longhorns have never gone without Perkins — who, at 26 games, is Texas’ leader in games started — before. Remember, the senior right guard sat out the UTEP game while dealing with an injury. But suspended for Saturday’s game after his Sept. 24 arrest on DWI charges, Perkins remains a key member of the offensive front. Texas has been averaging 238.3 rushing yards per game. The Horns had 329 on Saturday.

3. DID A WIDE RECEIVER STAND OUT?

Shane Buechele attempted 33 passes, which ties his season high (Cal), and connected on 21 of them. But this was a spread-the-wealth kind of game, just as it’s been a spread-the-wealth type of season for the passing game. Saturday was a day for some of those other guys — Jake Oliver had four catches, Armanti Foreman three and Dorian Leonard two, including a big 49-yarder on a catch-and-run. Even Andrew Beck, who caught his first career touchdown from 39 yards out, got into the act. Still, Texas was working against the second-to-last rated pass defense in the Big 12, and there wasn’t a single big pass completed downfield.

4. HOW DID TEXAS FARE ON THIRD DOWNS?

About the same: Meh.

Texas was 7 of 17 on third-down conversions. That’s an average of 41 percent. Know what the Longhorns have been averaging on the season in terms of converting third downs into first downs? Forty percent. That ranked 65th in the country, and only Iowa State and Kansas have worse success rates in the Big 12. There were four three-and-outs for Texas on Saturday. But there also were drives of 14, nine and eight plays. Like we said, 40 percent.