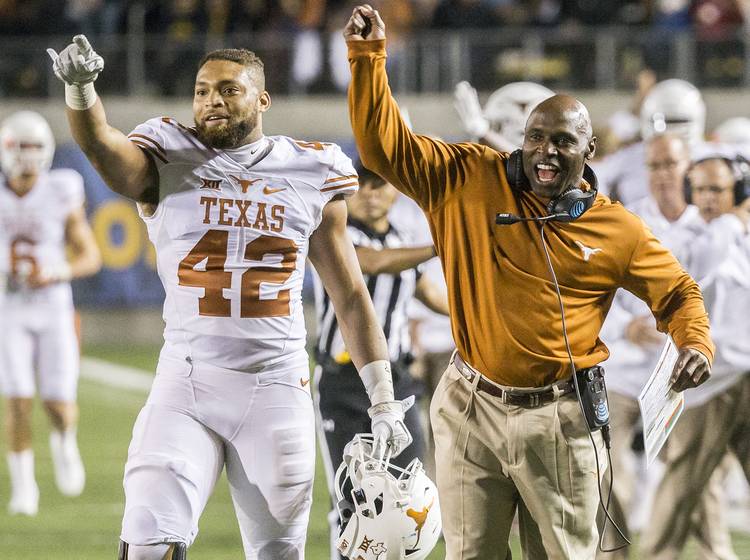 Here’s our staff takes on the Longhorns-Cowboys:

Brian Davis: Fix the road issues and win a title

Texas’ inability to play well on the road is one of the most frustrating aspects of Charlie Strong’s tenure. This goes back to the critical punt return and stop-and-go route against UCLA. Or the shellacking Texas took against Arkansas. Or the first 15 minutes at TCU. What gives? As things stand, Texas is 1-5 in true road games since the start of the 2015 season. And Baylor fans believe if the 2015 regular-season finale had gone two minutes longer, the Bears would have won. Texas must show up ready to go in Stillwater; the Longhorns have back-to-back 11 a.m. starts these next two games. A big 12 title is winnable. Right now. In 2016. But if the Horns can’t perform on the road, forget it.

A lot of matchups can be exploited in this game. The Cowboys can throw the football, and Texas just gave up nearly 400 passing yards. Texas can run, and OSU has one of the Big 12’s worst run defenses. Then there are turnovers. OSU ranks 101st nationally in turnovers lost, but no team has forced fewer turnovers than Texas’ one. Something has to give.

Kirk Bohls: The edge goes to OSU, but the Horns are due

Oklahoma State has a slight edge over Texas. At quarterback. At receiver. On defense. In home-field advantage, even though the visitor has won the last seven meetings. Coaching could make the difference because the Longhorns are so due for a well-played, 60-minute game on the road, where they’ve dropped five of their last six. Vance Bedford needs to prove himself with better calls on defense or he and Charlie Strong might both go down with the ship. Lose this one, and Strong’s ship starts to take on serious water.

Cedric Golden: Show us something on the road for a change

I’m picking against Texas knowing full well the Longhorns have dominated at Boone Pickens Stadium. Texas has won eight straight in Stillwater, which is one of the most raucous game environments in the Big 12. The fans are on top of the action with little sideline room, leaving players in clear earshot for trash talk from the stands. Maybe the Horns can go in there and take care of business with a bunker mentality and keep this streak going. It’s a pick-em game in my book, but I need them to show me something in a true road game before I pick them again to win away from DKR.

The Big 12 looks winnable this year, but is Texas a team that can win it?

The Eyes of Texas: Three Cowboys the Horns will be watching