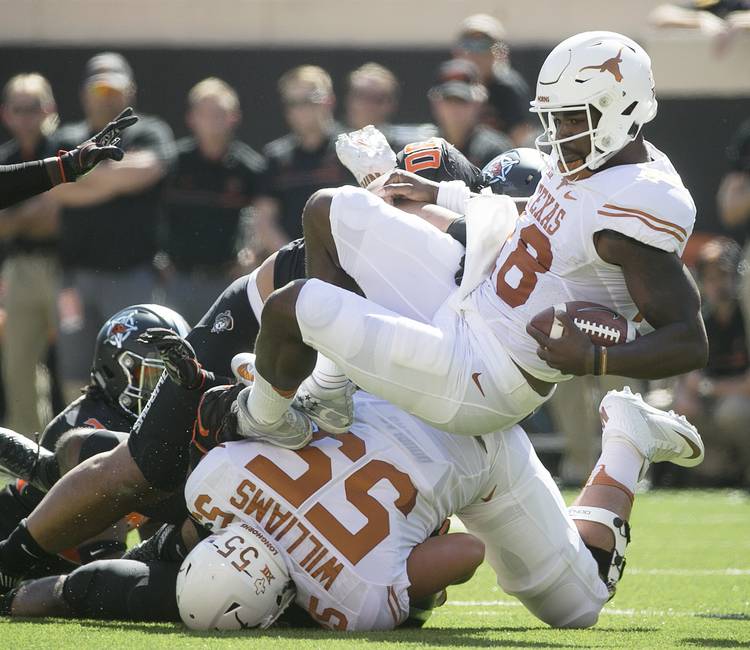 Texas's Tyrone Swoopes is brought down by OSU during the second quarter at Boone Pickens Stadium in Stillwater, Ok., on Saturday, October 01, 2016. Texas lost to OSU 49-31. DEBORAH CANNON / AMERICAN STATESMAN

WHY NO. 22 TEXAS (2-2, 0-1) LOST: Because the defense, despite the off week allegedly spent soul-searching and game-plan refining, struggled. Again. Especially the secondary. Again. Missed tackles. Two blown sacks. One dropped interception. Miscommunication between defensive backs. It was another sloppy performance for a unit that has now given up 50, 49 and 47 points in three of its first four efforts. We saw Sterlin Gilbert weave D’Onta Foreman and Chris Warren III in and out of drives with great effectiveness. Unfortunately, both left the game with injuries after combining for 254 yards and two touchdowns. And Shane Buechele didn’t look quite right. All in all, a step back coming off a previous loss and a previous step back. The road team had won seven straight games in this series, yet Texas found a way.

WHY OKLAHOMA STATE (3-2, 1-1) WON: If it’s a shootout, you’ve got to like the Cowboys’ chances. Mason Rudolph is in the conversation when you’re talking about the Big 12’s top quarterbacks. He threw for 392 yards and three touchdowns, and the Cowboys didn’t commit a single turnover. Justice Hill had a 100-yard game for the second straight week, and James Washington looks like he’s going to be playing on Sundays. He left in the second half, but by that point, the Cowboys didn’t really need him; Texas managed only six points in the final two quarters. And anyone remember who the All-Big 12 preseason extra-point team nosetackle was? If it wasn’t Vincent Taylor, it should have been.

THE EYES OF TEXAS: … were on three specific Cowboys — wide receiver James Washington, who’s led Oklahoma State in catches the past two years and has averaged a Big 12-best 122 receiving yards per game entering this game; quarterback Mason Rudolph, who trailed only Texas Tech’s Patrick Mahomes and TCU’s Kenny Hill in passing yards among conference passer and who threw for 290 yards last year vs. Texas; and freshman running back Justice Hill, who was coming off a 122-yard effort against Baylor.

Washington had three catches for 91 yards, including a 54-yard touchdown. He was targeted a team-high six times and missed a significant portion of the second half after leaving with a concussion.

Rudolph was solid, going 19 of 28 for 392 yards and three touchdowns. He didn’t commit a single turnover after his ball control was questioned throughout the week. He also added a rushing touchdown.

Hill was the featured back for the second straight week, and delivered again. He had 25 carries for 135 yards, including a 30-yard touchdown on the Cowboys’ first drive.

Offense: D’Onta Foreman. And it could’ve ended up being Chris Warren III. Both runners graded out as incompletes because of injuries. But it’s hard to argue with a 148-yard, two-touchdown game.

Defense: Jason Hall. He led the team with eight tackles and had two sacks on the day. It wasn’t a good day at all for the secondary, but the junior safety represented.

(1) Tyrone Swoopes continues to thrive with the 18-Wheeler. He scored twice on Saturday, his 16th and 17th touchdowns from that short-yardage package since last season. He’s now third on the all-time school list for rushing TDs for a quarterback (22).

(2) Again, how ’bout that Andrew Beck? Who knew there was really a play designed for a tight end in a Texas offense anymore.

(3) The running game continues to churn. Will it stay that way? Depends on those injuries to Foreman and Warren. But their respective 100-yard games made it the first time since 1970 that the Longhorns have had two running backs with 100 yards in back-to-back games.

TEXCETERA: Texas is now 24-7 all-time vs. Oklahoma State, but the Cowboys have now won five of the last seven meetings. … Strong is now 13-16 in his Texas tenure. That includes a 9-10 mark in the Big 12. … Linebacker Erick Fowler made his college debut; the freshman from Manor is the 15th freshman who has played this season. …

ON DECK: OKLAHOMA (Oct. 8, 11 a.m., Fox Sports 1): It just seems like this is the most important game of the season every year, for one reason or another. This year’s reason: Texas cannot afford an 0-2 start in the Big 12, not with Baylor and TCU still on the schedule, and where this season ends up will probably spin out of how the Longhorns look and fare against the Sooners. But no pressure.