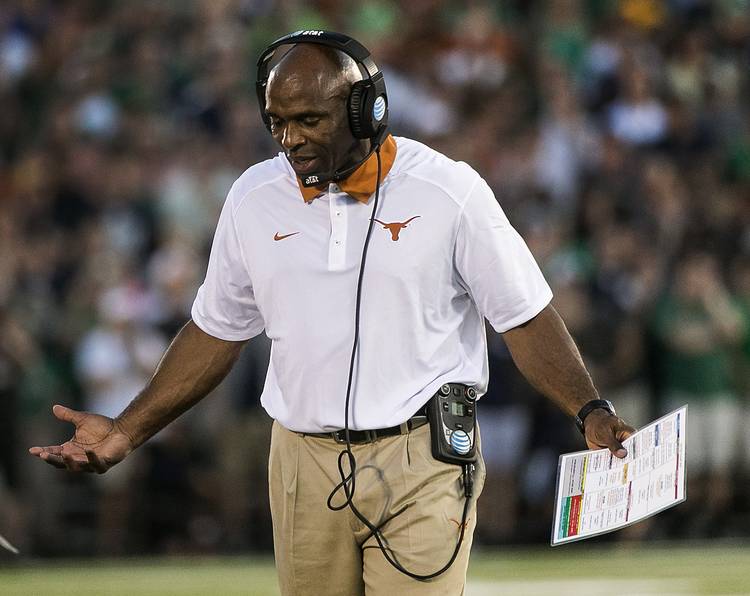 With few major moves available, Charlie Strong is betting on himself.

Texas’ third-year coach confirmed Monday that he has demoted defensive coordinator Vance Bedford and will assume play-calling and leadership of the Longhorns’ defense the rest of the season.

It’s a bold gamble, but Texas (2-2, 0-1 Big 12) needs some kind of spark heading into the Red River Showdown. It’s also one that may leave Strong boxed in.

If the Longhorns can’t turn things around this week against the 20th-ranked Sooners (2-2, 1-0) or in the remaining seven games after that, then Strong’s job status may be in serious jeopardy.

“I don’t think it’s desperate times, desperate measures,” said Strong, who spoke to reporters in the Centennial Room with athletic director Mike Perrin in attendance for the first time. Perrin was there to show support, a UT spokesman said, though he left without addressing reporters.

“Sometimes you feel like you need to breathe new energy into some of these guys and just hope this will be good move for them, and it will be,” Strong said.

One week ago, Strong said changing defensive coordinators “would hurt us.” But he called some plays in Saturday’s 49-31 loss to Oklahoma State and appeared active on the sidelines. Bedford looked detached at times while supervising the secondary.

Asked why Strong didn’t make this move during the off week, the coach said, “You just felt like at this time right now, it was just a move that needed to be made.”

Bedford did not respond to messages from the American-Statesman, and his weekly press conferences on Wednesdays have been cancelled. When Strong demoted offensive play-caller Shawn Watson after the 2015 season opener, Watson coached the rest of the season but never spoke publicly again.

Bedford will remain on staff and work with the secondary alongside defensive backs coach Clay Jennings, Strong said.

To say UT administrators and major donors are concerned would be an understatement. Mega-donor Red McCombs, who criticized Strong’s hiring in 2014, said, “The whole world knows we have issues, so it does hurt.”

“Don’t tell me you can’t fire someone in the middle of the season,” McCombs told the San Antonio Express-News on Monday.

From this point on, all eyes will be focused on Strong, who has spent the bulk of his career coaching defense.

“It’s hard, man,” defensive tackle Breckyn Hager said. “Today I was in class and my buddy (defensive tackle) Jordan Elliott was on Twitter and it was trending — Charlie Strong. I looked and said, ‘Aw, dang.’”

“We love him as a coach,” Hager added. “Getting a new coach is going to set the program back. We have one of the best in the business, and we’ve got to keep him.”

Strong held himself accountable, and so did his players. Asked if he’s playing up to par, linebacker Malik Jefferson said, “No, I haven’t. I haven’t done anything to impact this team. That’s my problem. That’s what’s eating me alive right now.”

Twice on Monday, Jefferson frowned on the idea that he’s playing out of position at middle linebacker instead of being used as an outside pass rusher. In four games, he’s tied for second on the team with 23 tackles but has only one sack and two pass breakups.

Texas players usually don’t get into game-planning until Tuesdays. So the Horns have yet to see how Strong acts as a defensive coordinator instead of solely being head coach.

“We don’t know right now, but we’ll see,” defensive tackle Chris Nelson said. “He’s been on us every day. He’s always in our meetings, so it’ll probably be the same.”

Even the offensive players believe Strong is doing everything he can to right the ship.

“I love coach Strong,” left tackle Connor Williams said. “I have the utmost respect for him, and I know he’s going to do everything he can at the end of the day to help us win and make us become the best players we are. I’ve never doubled him for a second.”

What Strong does not want is for players to worry about his job.

“I told our players yesterday, ‘Guys, y’all go play and just let me handle everything else,’” he said. “It doesn’t matter to me anymore, because what’s going to be said is going to be said.”

With eight games remaining, plenty of opinions will spew forth from everywhere.

As offensive guard Patrick Vahe said, “We’re all in this together.”