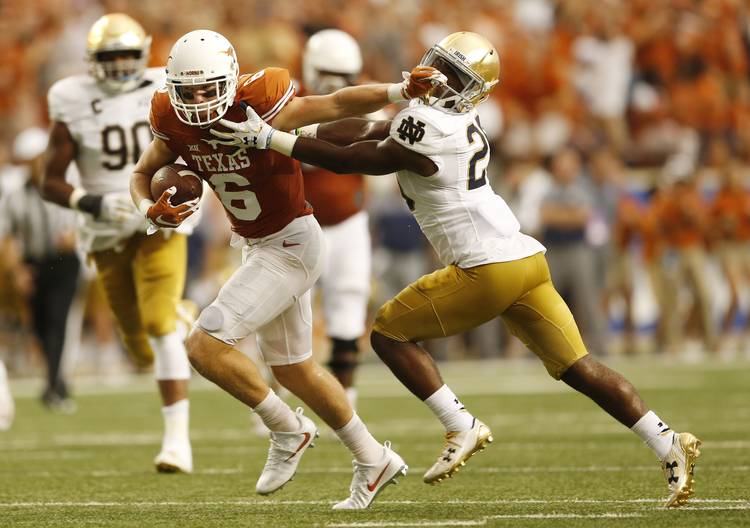 Texas’ junior wide receiver hasn’t visited the fast-food chain in a while, but recently joked that he dreams about it on a nightly basis. The sacrifice of cheeseburgers has helped with his physical transformation, though. And as a result, an on-field transformation has also occurred for the former four-star recruit.

“It’s definitely been a journey, but I’ve loved every second of it,” Oliver said. “I came in, I wouldn’t say privileged, but I worked really hard in high school … but I didn’t exactly know what it took to be a high-level receiver at the college level.”

Oliver has turned 19 targets from Shane Buechele and Tyrone Swoopes into 13 catches this season, and he’s averaging 9.9 yards per reception. Oliver has yet to get into the end zone, but seven of his catches have resulted in first downs. Two of those first-down catches were recorded on a third-down attempt, and another set up a fourth-and-1 that the Longhorns converted.

This was the production that Texas fans expected when Oliver signed in 2013. The U.S. Army All-American from Dallas Jesuit caught 56 touchdown passes in high school, and he graduated as the state’s all-time leader in receptions. (Oliver’s mark of 308 catches has since been broken by Booker’s Jared Reagan).

The 6-foot-3-inch Oliver, though, did not make an immediate impact in Austin. He redshirted in 2013, and he didn’t see any playing time in 2014. He began playing on special teams his sophomore year, but went a third year of college without a catch.

Never the quickest guy on the roster — on Monday, Swoopes delicately danced around a question about where Oliver would finish in a 40-yard dash — Oliver checked in at 225 pounds during the 2015 season. That was about 20 pounds heavier than the weight he signed at. Going through three position coaches and four offensive coordinators over his first three years also didn’t help with Oliver’s development.

“Trying to give a good first impression to four different guys is kind of tough,” Oliver said. “Honestly, it’s just about coming out and working hard every day and proving that you’re the right guy for the position.”

After things began to click in 2015, Oliver dropped between 20 and 25 pounds in the offseason — once again, good-bye Whataburger — and the outside pass-catcher was moved to an inside spot. Texas coach Charlie Strong told reporters earlier this season that Oliver was the only receiver that caught 100 footballs during the team’s fall camp, which was apparently enough to impress a new set of offensive coaches in coordinator Sterlin Gilbert and position coach Charlie Williams.

This fall, Oliver is one of five Texas receivers with either 13 or 14 receptions. He led the Longhorns in catches at Cal on Sept. 17, and he and Jerrod Heard both snagged a team-high four footballs in last week’s road loss at Oklahoma State.

“We’ve always known that Jake was special,” said Swoopes, who joined Oliver in that 2013 signing class. “We’re glad that he’s finally getting a chance to show it.”