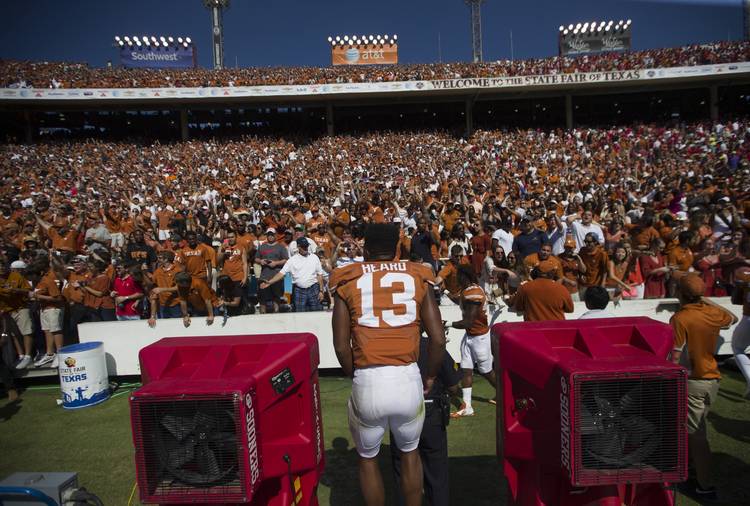 Quandre Diggs would’ve been proud to stroll through the room on Monday — and not because of the free Pluckers. The former Longhorn, who once told reporters “I’m just here for the wings,” was always troubled whenever teammates acted like losing didn’t bother them. It bothers Malik Jefferson and Breckyn Hager and others. Losing bothers the Longhorns now, or as Charlie Strong likes to say, “It burns.” That’s the real sign things could change in the coming weeks. The team is tired of losing when the players know they can win. “Players are tired of this feeling,” left guard Patrick Vahe said. Fans certainly hope so.

Danny Davis: Time will tell for this Texas defense

Endings are rarely happy when its comes to coaching, so I guess it shouldn’t have been a surprise that the final words of this chapter of Vance Bedford’s Texas story weren’t great. Perhaps, though, we should save our final judgments until the end of the season, because we may soon find out if the problem was him (Bedford) or them (the players).

Shane Buechele won’t be overly emotional in this week’s Texas-Oklahoma game. Or the “OU-Texas game” as the freshman quarterback inadvertently called it. That was from growing up in a family with OU siblings. He even attended the 2014 game that the Sooners won. He sat on the OU side that day. “I wouldn’t say I rooted for them,” Buechele said, “but I was on their side.” His brother Garrett has kiddingly told Shane that he’d never wear orange, and Shane quipped that his sisters “may be wearing white.” Buechele knows this is football war even though he added, “I don’t want to make it any bigger than it is.” It might be even bigger, Shane.

When I asked Charlie Strong about players emotionally hurting in the locker room, he said that was a good thing. That’s strange on the surface, but sensible in meaning. Strong has questioned his team’s desire in the past, but not in 2016. He believes the Longhorns are more talented than any team in the Big 12 and equally as talented as Oklahoma. He’s banking that Texas will take the hurts from lost weekends in Berkeley and Stillwater and use them as fuel to get a second straight win over the Sooners. Texas seems to be teetering on the edge, which suggests the Horns are ripe for a knockout blow. But anyone who has followed this rivalry knows it’s foolish to read the tea leaves. Anything can happen in the Red River Rivalry.

By taking over the Texas defense, Charlie Strong is betting on himself

Finally, in Year 4, Jake Oliver has transformed into a receiving threat at Texas