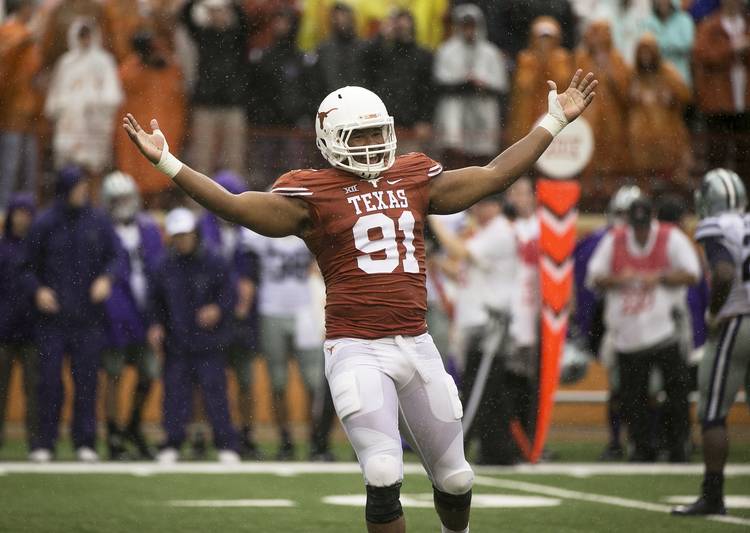 Bryce Cottrell is a busy man.

Texas’ senior defensive end, who has already earned a degree in corporate communications, is taking four courses this semester and has a daily class on the football field. An aspiring businessman, Cottrell also has numerous meetings to attend throughout any given week.

He doesn’t use caffeinated beverages to get him through these 13-hour days, but he does enjoy an occasional Arnold Palmer. The drink that Cottrell would like you sell you on, though, is vodka.

Cottrell, 23, is the driving force behind Noble Wolf Vodka, a premium vodka that’s distilled from Florida grapefruits. Since its launch in June, nearly 2,000 bottles have been sold in the Austin and San Antonio market, Cottrell said.

“I love the industry,” Cottrell said. “I fell in love with it. It’s amazing the people you can talk to just over a drink, especially if people like it. Why not capitalize on the opportunity that I have right now in front of me?”

The idea for Noble Wolf Vodka was sprung on the plane ride back after the Iowa State game last year, when Cottrell was captivated by an episode of “Entourage” in which Turtle, one of the main characters, became involved in a tequila company. Cottrell didn’t have much interest in tequila, but was intrigued by vodka.

He began to do research, and gave $80 and a hamburger to a chemist he found on Craigslist to come up with a recipe. Using money he’d inherited from his stepfather, Cottrell started a company that now includes an office off Loop 360, three contract workers, a distribution deal with Republic National Distributing Company and a bronze medal from the 2016 San Diego International Spirits Competition.

Because of his age, Cottrell said he’s often mistaken in meetings for a Noble Wolf salesman, not its owner. His toughest sale, though, was made to his mother.

Felisha Cottrell said her son has always been a businessman. After-all, his stepfather — whom Cottrell refers to as his father — was hair-care titan Comer Cottrell, whose Pro-Line Corp business created the Jheri curl-at-home Curly Kit in the 1980s. She also remembered a young Bryce attempting to sell water to golfers on the course they lived by in Plano. Still, when Cottrell approached her at the end of last season with his vodka company idea, she was taken aback.

Cottrell, undeterred, brought the bottle and logo design — which features his dog, Blue — home over the holiday break. He also presented his mother with the first batch of his vodka to sample. It was enough for Cottrell to gain financial and emotional support from Felisha, who likes to drink the vodka with some lime.

“I’m just in awe of him,” Felisha Cottrell said. “I didn’t understand the process and I still don’t. He’s just doing it, and he’s still doing it. I operate with a side of caution and he’s fearless, and I’m learning that about him.”

Cottrell started eight games last season, but an ankle injury and the emergence of Charles Omenihu has limited him to three tackles this fall. One of three captains for last week’s loss at Oklahoma State, the 6-2, 260-pound Cottrell has 42 career tackles and five sacks.

There are eight, maybe nine games left in Cottrell’s UT career. He sees a future after football — those NFL dreams began to fade last year — that includes becoming a player in the area’s liquor industry.