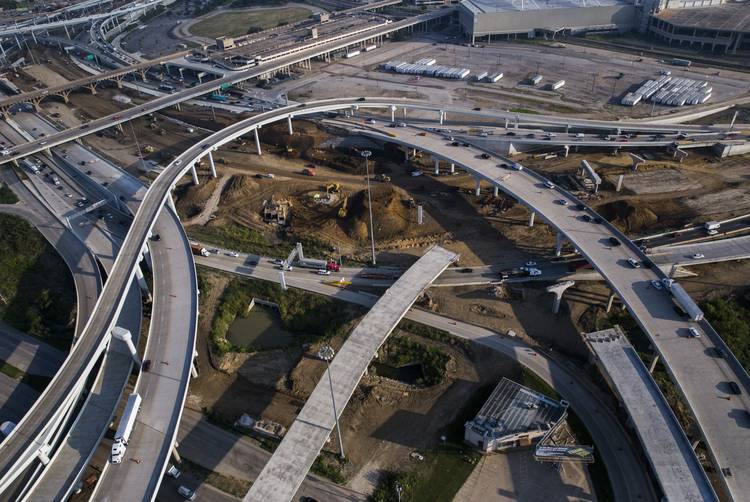 The Horseshoe project construction on Tuesday, September 13, 2016 in Dallas. Pictured is Interstate 30 and 35 on the south east side of downtown. (Ashley Landis/The Dallas Morning News) The project is remaking the 'Mixmaster' interchange of I-35E and I-30, where the two meet on the southwest side of downtown Dallas.

By about 2:30 p.m. Saturday we’ll know if the beleaguered Longhorns can slow down OU.

But what is not in dispute is that Interstate 35, still in the throes of a decade-long expansion between Central Texas and Dallas, has a staunch defense for anyone looking to plow through Salado and Temple. And while the Texas Department of Transportation will follow its traditional policy on OU weekend of shutting down active construction, drivers headed north for the game in the next couple of days (and returning afterward) should expect to hit long stretches of lanes narrowed by concrete barriers.

And, in a special new treat, they will also face a navigational challenge when they get to Dallas. The so-called “mixmaster,” the confluence of I-35, Interstate 30, Central Expressway and Interstate 45, is undergoing a massive re-do. And that set of interchanges, confusing to out-of-towners in the best of times, stands between Austin and the Cotton Bowl, site of the game.

“The heart of the mixmaster is under reconstruction now,” said Tony Hartzel, spokesman for TxDOT’s Dallas district, “so you really need to pay attention.”

Hartzel said drivers should have their eyes peeled for electronic message signs that should tell them which exits to use to get to various directions and roads.

Since the middle of last decade TxDOT has been expanding I-35 from four lanes to six lanes beginning north of Jarrell and extending to the “split” north of Hillsboro where I-35 West heads to Fort Worth and I-35 East tracks toward Dallas. That project (actually a series of separate projects) is entering its final couple of years, so football fans reasonably could think that the long traffic nightmare is about to end.

Not so. Now TxDOT has set about expanding I-35 East to six lanes, and that construction zone spans more than 25 miles from the Hill-Ellis county line (a few miles northeast of the split) to north of Waxahachie. That work is still in its earliest stages, but already the concrete barriers are in place in various locations narrowing lanes to 12-feet wide or, near Waxahachie, to 11 feet.

Hartzel is optimistic about what fans might experience in that Ellis County stretch.

“That area doesn’t get as much traffic” as I-35 south of the split or north of there in Dallas’ exurbs, he said. “So we haven’t seen much congestion down there due to the construction.”

That has not been the case through Bell, McLennan and Hill counties over the past decade, as Central Texas drivers know all too well. Using the interstate to get to and from the Dallas-Fort Worth area has been something of a roulette game, with motorists never knowing if they might get stuck behind a wreck between the concrete barriers that backs up traffic for miles.

That construction has now narrowed to one last 36-mile interval, from Salado, through Temple and north to mile marker 318.

“Drivers are going to see typically four lanes, two lanes in each direction between barriers,” said Ken Roberts, spokesman for TxDOT’s Waco district. The narrowed areas, he said, “are not continuous, but for the most part it is (between barriers) all the way to Bruceville-Eddy.”

So, what about future OU weekends?

The Salado work, Roberts said, should be done before next year’s game, and the section north of Temple before the Sooners and Longhorns meet in 2018. The Temple work, however, won’t be done until spring of 2019. And the Ellis County work should bedevil the next several games.

Roberts said I-35 through Waco, which already has six or more lanes, nonetheless is on the board for an overhaul starting in a few years. Death, taxes — and I-35 construction.

Texas’ Bryce Cottrell sees a future in vodka, not football