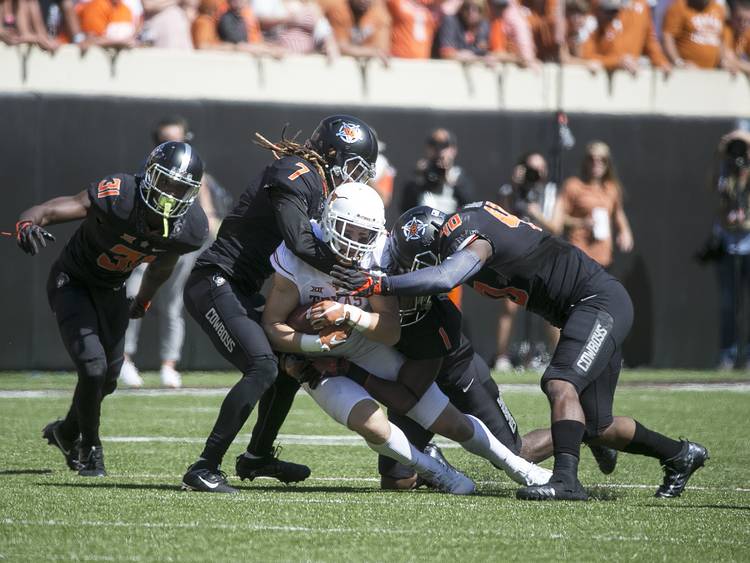 Texas's Jake Oliver is taken down by the OSU defense during the fourth quarter at Boone Pickens Stadium in Stillwater, Ok., on Saturday, October 01, 2016. Texas lost to OSU 49-31. DEBORAH CANNON / AMERICAN STATESMAN

Every week this fall, we’re looking at a number related to Texas football. Today’s notable number is 53.

Fifty-three is the number worn on the jersey of Texas long-snapper Jak Holbrook, who will keep his job in the wake of the Longhorns’ extra-point struggles against Oklahoma State. Only six of Michael Dickson’s 20 punts have been returned this season, and opposing teams have picked up 53 yards on those plays. Oh, and Colt McCoy started 53 games at Texas.

Fifty-three also accounts for the points scored by the Longhorns during the second halves of their four games.

Texas (2-2) is averaging 41.3 points per game, but only 32.1 percent of its 165 points are second-half points. Sixty percent of the Longhorns’ points have been reserved before halftime, while 13 points were tallied during those two overtimes against Notre Dame.

Texas enters the fifth game of its season ranked 23rd nationally in scoring, one of only 29 teams in the country scoring at least 40 points a game. Of those 29 teams, though, only Colorado (10.4 points per second half) has a poorer second-half showing than Texas’ 13.3 points.

So what’s ailed the Longhorns after halftime? It isn’t statistics.

“It’s just missing some things here and there,” offensive coordinator Sterlin Gilbert said. “Those are things we’ve identified and those are things we’ve already focused on and we addressed with our guys. They know and understand. It’s something that we’re encouraged about and motivated about making it get better.”

On Saturday, Texas will meet an Oklahoma team that is allowing 35.3 points per game and 15.8 points per second half.  In last week’s 52-46 win over TCU, Oklahoma nearly squandered a 49-24 third-quarter lead as the Horned Frogs scored 22 points in the fourth quarter.

“The same intensity that we have in the first half, we’ve got to take it with us into the second half,” offensive lineman Patrick Vahe said. “Really, we’re just going to play Texas football.”

Betting on the Horns: In this Red River rivalry, OU has struggled against a different kind of spread