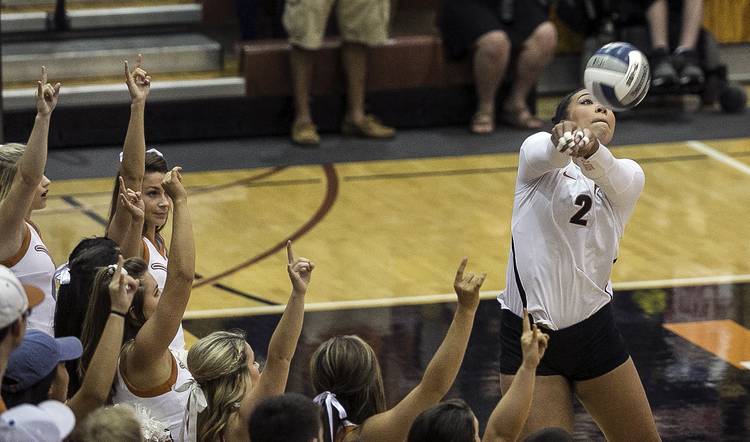 As a nine-year-old, Ebony Nwanebu had big dreams.

In an 11-year-old school essay that she pinned atop her Twitter profile this spring, Nwanebu wrote about her volleyball ambitions. Then a member of the Kaepa Blue select team — “Most of the time we win,” the youngster bragged — Nwanebu laid out goals of earning a college scholarship, playing professionally and becoming a star.

“That note was pretty cool to see because I’ve accomplished many of the things that I wrote,” said Nwanebu, who conceded that she had not yet fulfilled her goal of becoming as fast as a horse. “I’m not a professional volleyball player yet, so that’s still to come. Hopefully as I progress, I’ll get to that level and then all my dreams will have come true.”

Nwanebu, who was born in Austin, was a three-time state champion at Lucas Lovejoy north of Dallas. She signed with USC out of high school and led the Trojans in kills her freshman year, averaging 3.12 kills per set in 2014. She  transferred to Texas in 2015, but a back injury cost her all but one match.

“Sitting out was a new experience for me,” she said. “I learned the game from a different perspective. I learned how the coaching side works and how to be a better teammate off the court. I found out I can contribute in different ways than actually playing.”

One of those off-court contributions is her “EbbOnTheWeb” interview series with teammates and coaches that the team routinely publishes on Twitter. The Longhorns, though, have been just as excited about what a healthy Nwanebu is accomplishing on the court.

Nwanebu and outside hitter Micaya White — who missed last year with a leg injury — have become Texas’ top offensive threats. White leads Texas with her 4.51 kills per game, while Nwanebu has double-digit kills in 11 of the 12 matches she had appeared in. Last week Nwanebu shared Big 12 offensive player of the week honors with Baylor’s Katie Staiger.

“She’s looked great — has been playing at a remarkable level,” Texas coach Jerritt Elliott said. “She is one of the best players in the country.”

Nice to meet you: Texas and Kansas State will meet for the first time in soccer on Friday. Kansas State,  in its first year playing soccer, is 4-6-3.

Friday’s match won’t count in the Big 12 standings; Kansas State won’t compete for the conference title until 2017. The Longhorns, though, will be without leading scorer Alexa Adams, a sophomore forward who suffered a torn ACL injury to her left knee in last week’s loss to Oklahoma State.