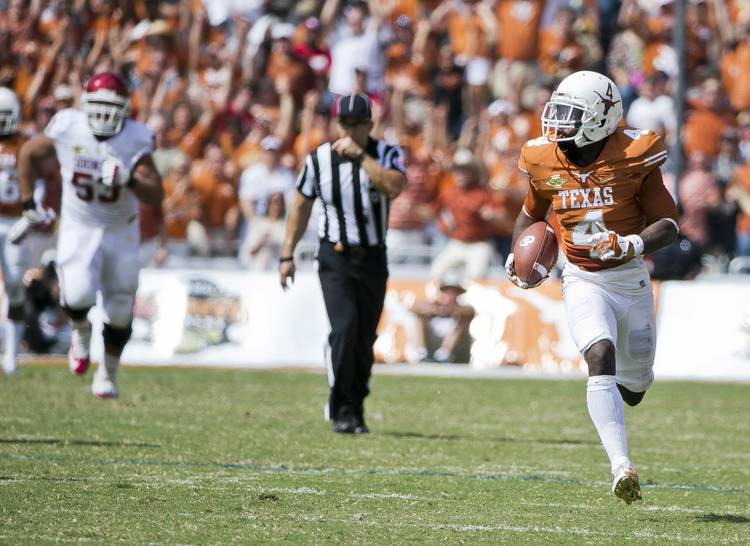 Texas Longhorn (4) Daje Johnson returns a punt 85 yards for a touchdown in the third quarter against Oklahoma at the AT&T Red River Rivalry college football game at the Cotton Bowl in Dallas,TX., Saturday, Oct. 12, 2013. (RICARDO B. BRAZZIELL / AMERICAN- STATESMAN

The more you know, the better prepared you are, especially if you’re trying to impress people with Red River Rivalry facts this weekend.

Here are seven Texas-Oklahoma factoids to annoy and impress people with while watching the game:

This pregame speech by Mack Brown was both not great, but also, well, right on:

The only Texas quarterback to go undefeated in four starts against Oklahoma is?

Peter Gardere was 4-0 against Oklahoma, winning every game from 1989 to 1992 against Oklahoma. Twice Oklahoma was ranked in the top 10 when Gardere beat them, including  in 1990 when Oklahoma missed a field goal at the end that would have won the game.

In a game that featured Earl Campbell running the ball for Texas, there were only 12 combined points scored. Russell Erxleben hit two field goals, one from 57 yards. Oklahoma scored the only touchdown with 1:38 left, but a bad snap led to a botched extra point and the game ended in a tie.

The third fewest yards Texas has ever gained was the 70 yards it managed against Oklahoma in 1985. Texas actually led in this game, but it was the defense scooping a fumble and scoring that led to the only touchdown. After that Oklahoma held Texas to 17 rushing yards and 53 passing yards and four first downs. Of course it’s not as bad as 2000, when Oklahoma held Texas to a Longhorn record of -7 yards rushing.

Texas held Oklahoma to -16 yards rushing in 2009, that’s the 13th best performance in program history. Texas allowed 311 yards passing this game, but what’s more impressive is that Oklahoma never gave up the running game, rushing 22 times for -0.7 yards per carry.