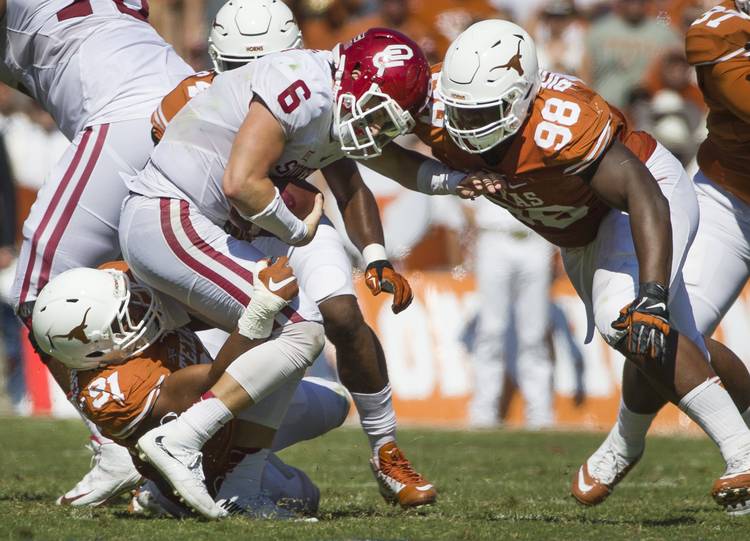 For the fourth year in a row and the fifth time in six years, Oklahoma is a double-digit favorite over Texas. Overall, the Sooners are favored for the seventh straight year in their Red River rivalry.

Those stats, along with the Sooners’ nine Big 12 championships to the Longhorns’ three, speak volumes about these programs.

Yet every year it puts Oklahoma in the unenviable spot as a huge favorite against its fiercest rival and Texas in the advantageous emotional position of the heavy underdog in a game where the talent appears to be pretty equal.

“I don’t think there’s a psychological downside to being the favorite,” the OU coach said. “That’s just outside noise. I’d rather be favored by 50 every week. That would mean I have a pretty darn good team.”

His Sooners are favored by as many as 11½ points Saturday, way up from an opening line of seven.

The numbers don’t jive with Stoops’ thinking. The past three years OU has been favored by 17, 16 and 12 points, and only once have the Sooners even won the game (31-26 in 2014). They haven’t come close to covering a spread.

Over the last decade, the Red River underdog is 6-3-1 vs. the line and has won four times straight up. Going back further, there is plenty to suggest the dog has his day in this series. Double-digit underdogs have beaten the line better than 60 percent of the time.

But after getting punched in the mouth by a lousy Texas team last year, Oklahoma would not seem a candidate to take the Longhorns lightly again. Baker Mayfield wants to beat Texas in the worst way, especially after the former Lake Travis quarterback played poorly in the game a year ago.

“I have a lot of friends back home who are UT fans, so I caught some grief,” Mayfield told reporters. “I grew up down there in the heart of UT land. I know what it’s all about, and it’s pretty special to me. Big week.”

Oklahoma generally takes care of business against Big 12 teams, on an 8-0 roll and 7-1 ATS since the Texas game. Don’t blame Sooners fans, though, if the double-digit favorite’s role makes them nervous.

The pick: In some ways, it smells like a blowout. Texas’ defense is a train wreck, and it’s not going to be fixed in one week by a few staff changes. Oklahoma isn’t without its own set of problems — 113th in turnover margin, 116th in scoring defense, 117th in penalty yards, 126th in pass efficiency defense, 127th in turnovers created. This game could be close for three quarters before the Sooners pull away and win 38-28.

Elsewhere: The nation’s big game Saturday is in College Station. While Texas A&M should continue riding its high, look for Tennessee, master of last-minute drama, to squeeze in under the 6½-point spread. … Iowa State is showing life after a terrible start and should cover as a 17-point dog at Oklahoma State.