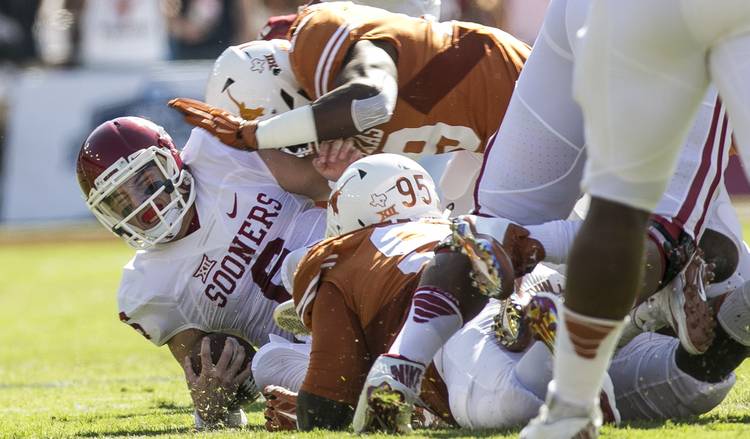 The Longhorns defense takes down Sooner quarterback Baker Mayfield in the first quarter of a game between Texas and Oklahoma in the Red River Showdown held at the Cotton Bowl in Dallas, TX. RODOLFO GONZALEZ/AUSTIN AMERICAN-STATESMAN

I’m wearing a red shirt. You got a problem with that?

The thing that may gall University of Texas Longhorn fans the most about those innocent-looking citizens sitting across the way in the Cotton Bowl on Saturday wearing all that crimson attire?

These Okies are no better than pickpockets.

I looked through this season’s University of Oklahoma football roster and counted up 58 — that’s right, 58 — players from Texas, and just 30 from Oklahoma.

Last time I heard, the Ten Commandments monument that used to grace the Okie State Capitol said, among other things, “Thou shalt not steal.”

And he ends up playing in Norman. For our enemies to the north. Why? How’d they sucker him into going up there? This being Oklahoma, did they promise him a brand new double-wide with a fancy kitchenette? Did they say, “Kid, you want to see a Tornado?” Did they give him a tour of, say, downtown Enid?

Then there was Adrian Peterson, of Palestine in East Texas. I’m sure you’ve heard of him. In 2012 he was the National Football League’s MVP. Before that, he was the star running back of the, you got it, Oklahoma Sooners.

All this talk about building a wall. What we need is a wall along the Red River to keep all of these Sooner recruiters the heck outta here.

We Texas fans make the goober jokes, don’t we? How many Sooner freshmen does it take to change a light bulb? None. It’s a doctoral course. Why do the Sooners use artificial turf in their stadium? To keep the cheerleaders from grazing. What does an OU freshman get on his SAT test? Drool. OK, so I lifted some of these jokes. They were sent in by fans to The Dallas Morning News.

But the reason for this animosity on Texas’ part? It may just be jealousy. Over the years, Oklahoma has managed to win seven NCAA national football titles. The Longhorns have only four, which makes your blood boil every time you see that stupid Okie covered wagon dragged onto the field, right?

Here’s the big question, though: Could the Sooners have won those titles if Oklahoma hadn’t been fortunate enough to

exist across the Red River from Texas?

I used to write a semi-annual column about the OU-Texas rivalry, a game you ought to see once even if you don’t care about football. It’s up there with Big Bend National Park, the Alamo — even the bottle house in Wimberley — in important Texas landmarks. It’s one of a few football games where half the stands are filled with one teams’ fans, while the other half of the stadium is taken up by the fans of the competition. Vibes of animosity drift across the field, from one side to the other.

I used to take this business more seriously than I do now. OK, so some of my observations in my Okie put-downs weren’t all that serious. I really didn’t mean it when I said that there really wasn’t a University of Oklahoma, that it was just a facade giving the state a way to create a football program.

Then there was Okie Pokie, an artwork I commissioned. Okie Pokie is a piece of plywood about 5 feet tall dotted with several dried cow patties that I bought from the town of Beaver, Okla. Some friends and I put Okie Pokie on wheels and dragged him into the state fairgrounds, right up next to Big Tex. Even got a fun snapshot of Okie Pokie standing between a couple of UT cheerleaders.

We thought we were funny. Some of the looks we got from Oklahoma fans, however, said that we were not.

I’ve given Oklahoma a list of silly and sophomoric nicknames:  Yokelhoma, Jokelahoma, Croaklahoma, Brokelahoma and Mobilehoma come to mind. And I pointed out there really isn’t much reason to spend time there, unless your car breaks down and you need to find a mechanic.

But I don’t make those sorts of observations anymore. I’ve moved onto a higher intellectual level in the manner I regard the OU-Texas rivalry.

Or, put another way, Hook ‘Em.

John Kelso is a humor columnist for the Austin American-Statesman. Email him at jkelso@statesman.com.